Gudebrod 10/0: It’s a true midge thread, wonderful to tie with. My life is changed.

A beetle imitation may not only be the most useful all-round terrestrial but the most valuable fly for general searching. The deerhair Crowe beetle serves me better than a grasshopper or ant pattern as a general terrestrial fly because the ubiquitous beetle is much more prevalent in the trout’s diet than most fishermen realise. A trout’s stomach isn’t always jammed with them, but there are always a few in my sampling. 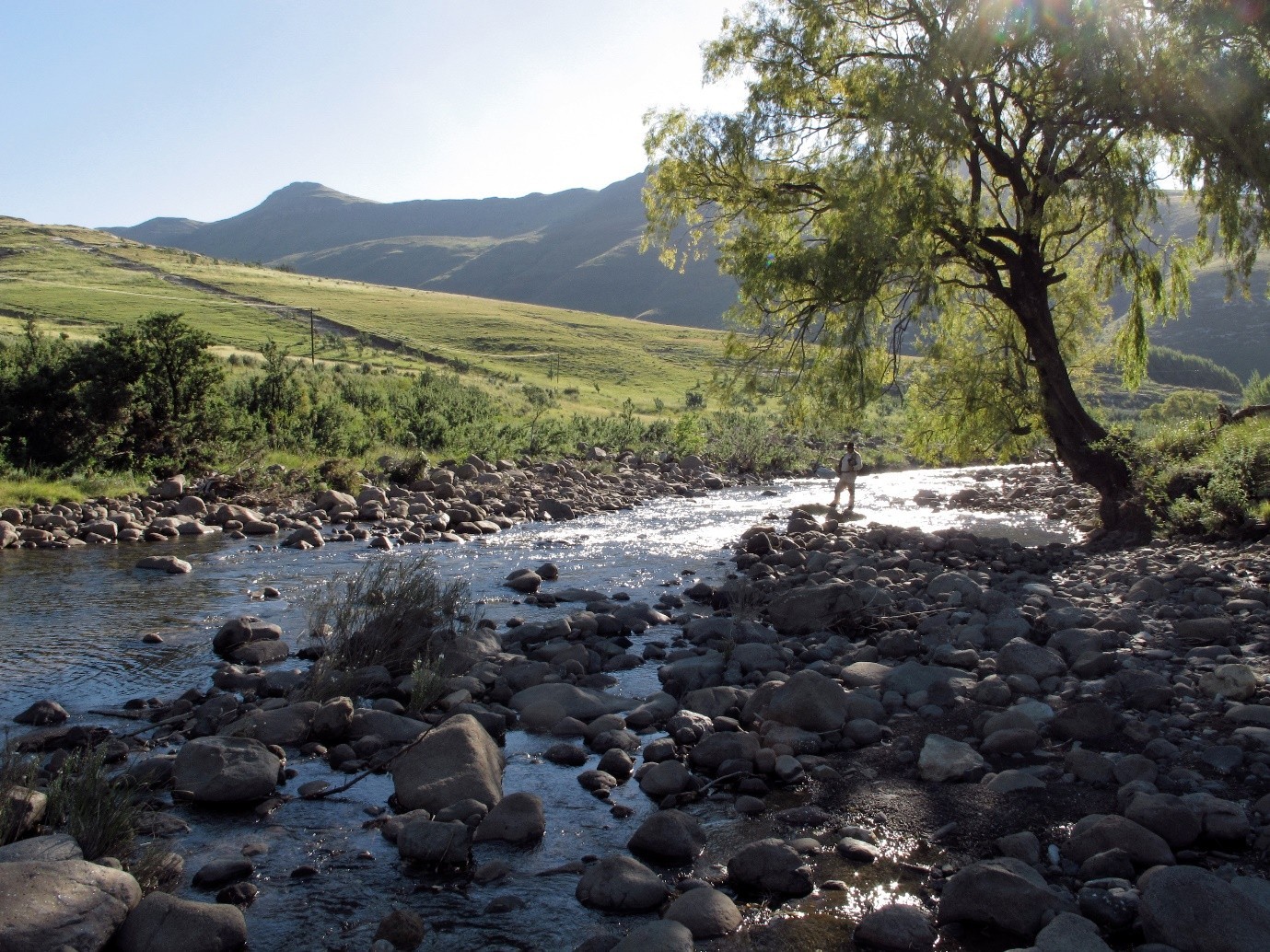 Willow trees and the insects that live on them, play a significant role in the diet of trout in Barkly East and Rhodes – Photo by Peter Brigg

In his 2004 book on tying small flies, Ed Engle’s favourite thread was Gudebrod 10/0 which is no longer available

In 2009 Rick Takahashi and Jerry Hubka published Modern Midges – Tying and Fishing the World’s Most Effective Patterns which contained illustrations and descriptions of hundreds of micropatterns from top international fly anglers.

Ultra Thread’s shiny finish makes it almost like floss and we recommend it when you need to wrap the thread flat on the hook. You can also twist it into a tight rope by spinning the bobbin clockwise creating a riblike appearance. The 70-denier is ideal for midge patterns down to a size 32.

Now we have Semperfli 24/0 Nanosilk which is thinner and stronger than the UTC product and will significantly facilitate the creation of tiny flies.

I had just finished writing an article Re-thinking the Birkhall Beetle for Tom Sutcliffe’s website when my order of 24/0 Nanosilk in black and white was courier-delivered to my doorstep by the local Semperfli agent, Xplorer, in Durban. 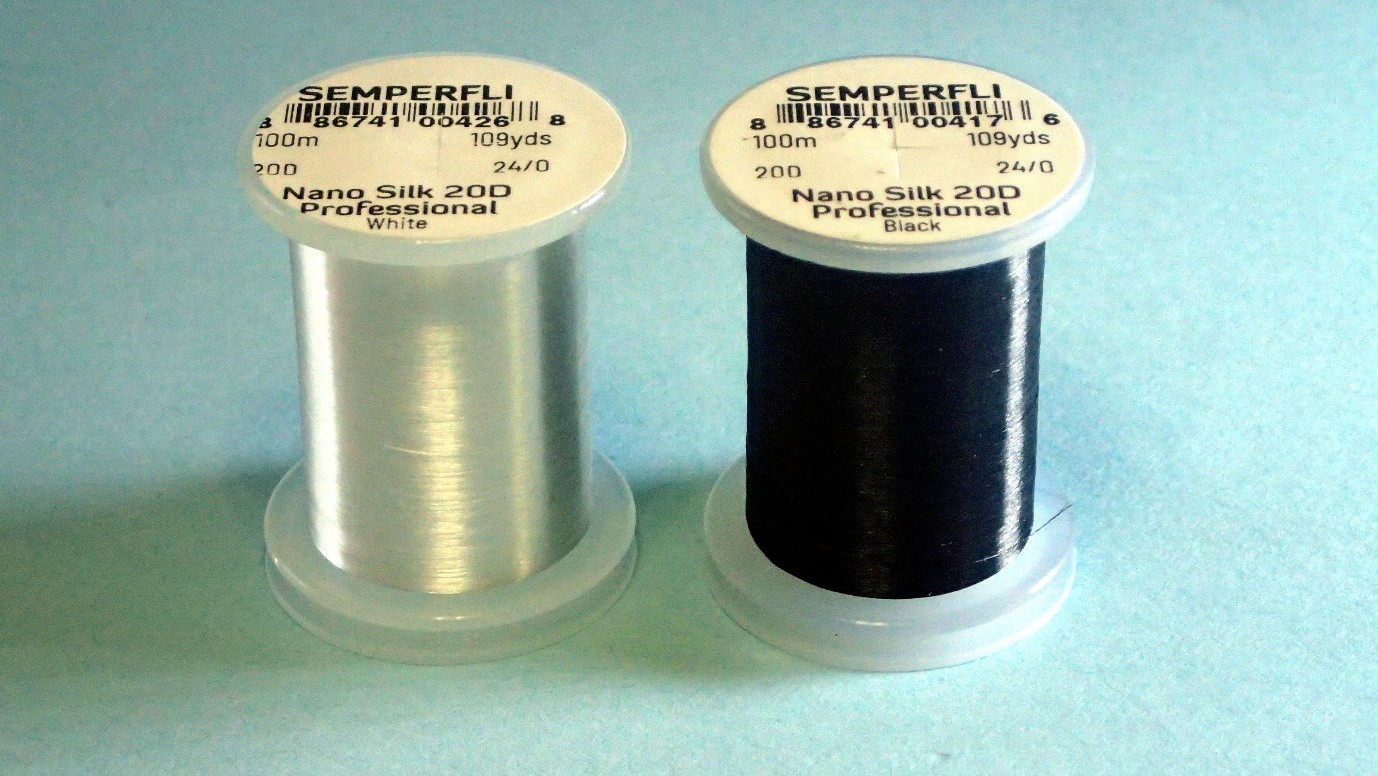 Semperfli 24/0 Nanosilk is available in black and white and, because it is virtually unbreakable, will greatly facilitate the tying of tying of tiny flies

I had used 18/0 Nanosilk and a #16 Dohiku 303 ‘Beetle’ hook for the sinking beetle pattern illustrated in that article and the 24/0 Nanosilk enabled me to tie a smaller version on the #18 Dohiku 303 which is a closer match to the natural. 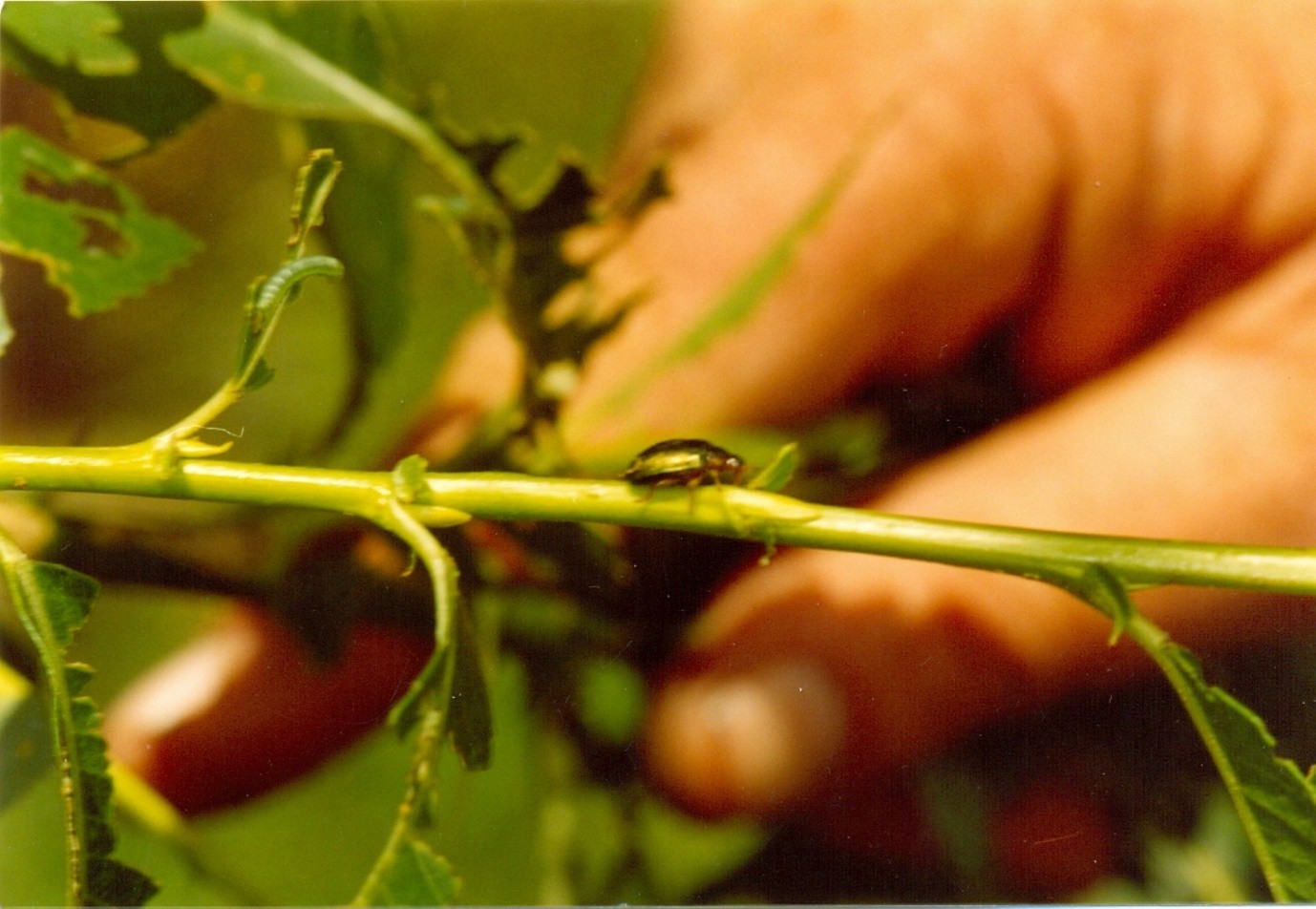 Beetles and inchworms which inhabit the willow trees on the rivers in Barkly East and Rhodes are a significant component in the diet of trout in those areas.

As I pointed out in the Birkhall Beetle article, imitations of this insect are essentially silhouette patterns but the thinner, stronger 24/0 Nanosilk enabled me to add legs and wings as extra distinguishing features and triggers.

When beetles land in the water, their hind wings which enable them to fly often protrude at the rear and this can be a trigger. 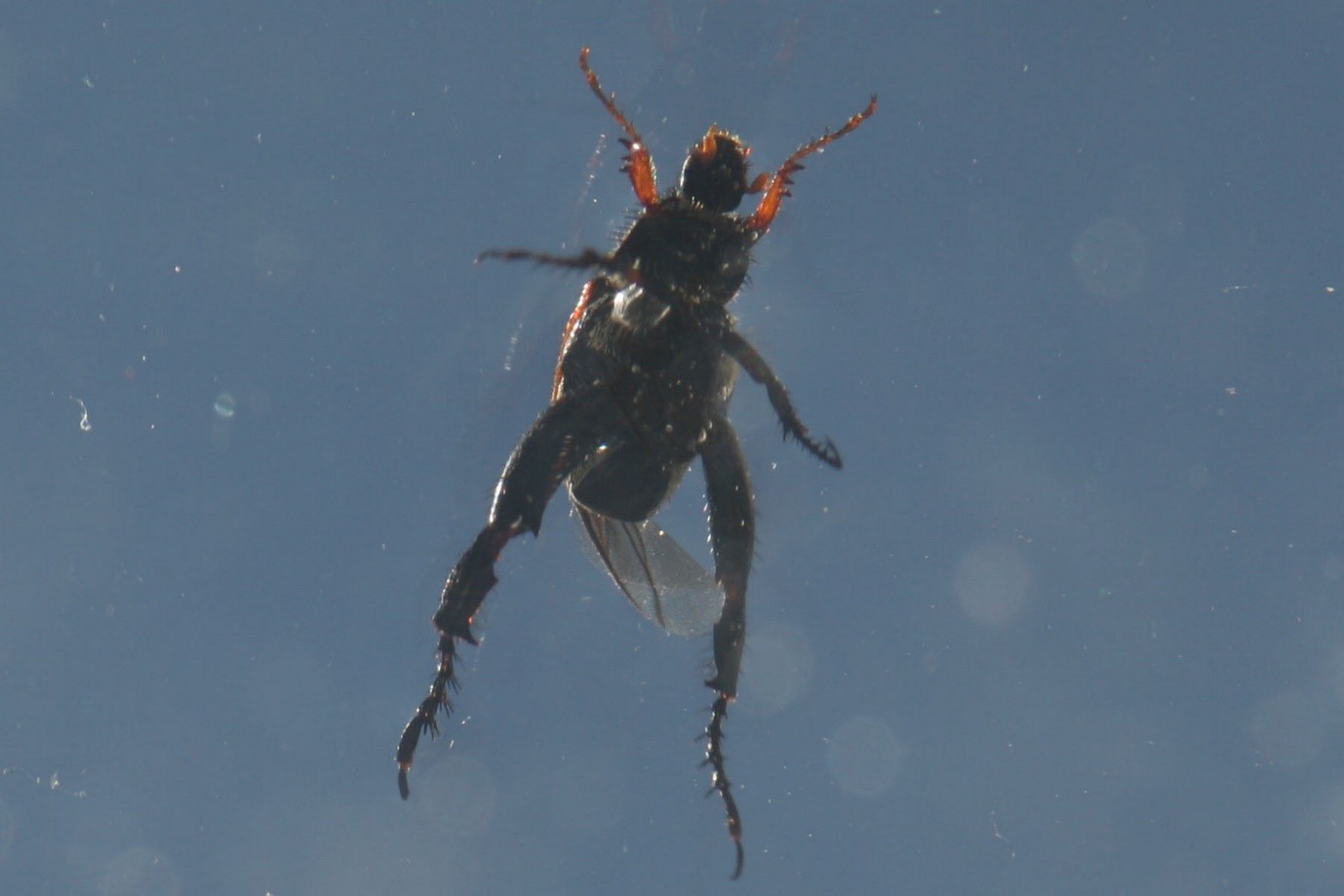 When beetles land in the water, their hind wings are often visible

The best material for this is the opaque plastic wrapping used in supermarkets to protect food. Cling Film is not robust enough.

When it comes to legs you can use flexible materials like rubber legs which actually move with currents or you can use Wapsi Midge Flash which suggests movement as the light ripples along it.

I found the ideal material for the wing case of the Nanosilk Beetle – olive Scud Back, a stretchable and translucent material originally developed for Czech Nymphs.

In the pattern illustrated here, I used olive Quick Descent Dubbing but peacock herl or green Ice Dub would be useful substitutes. 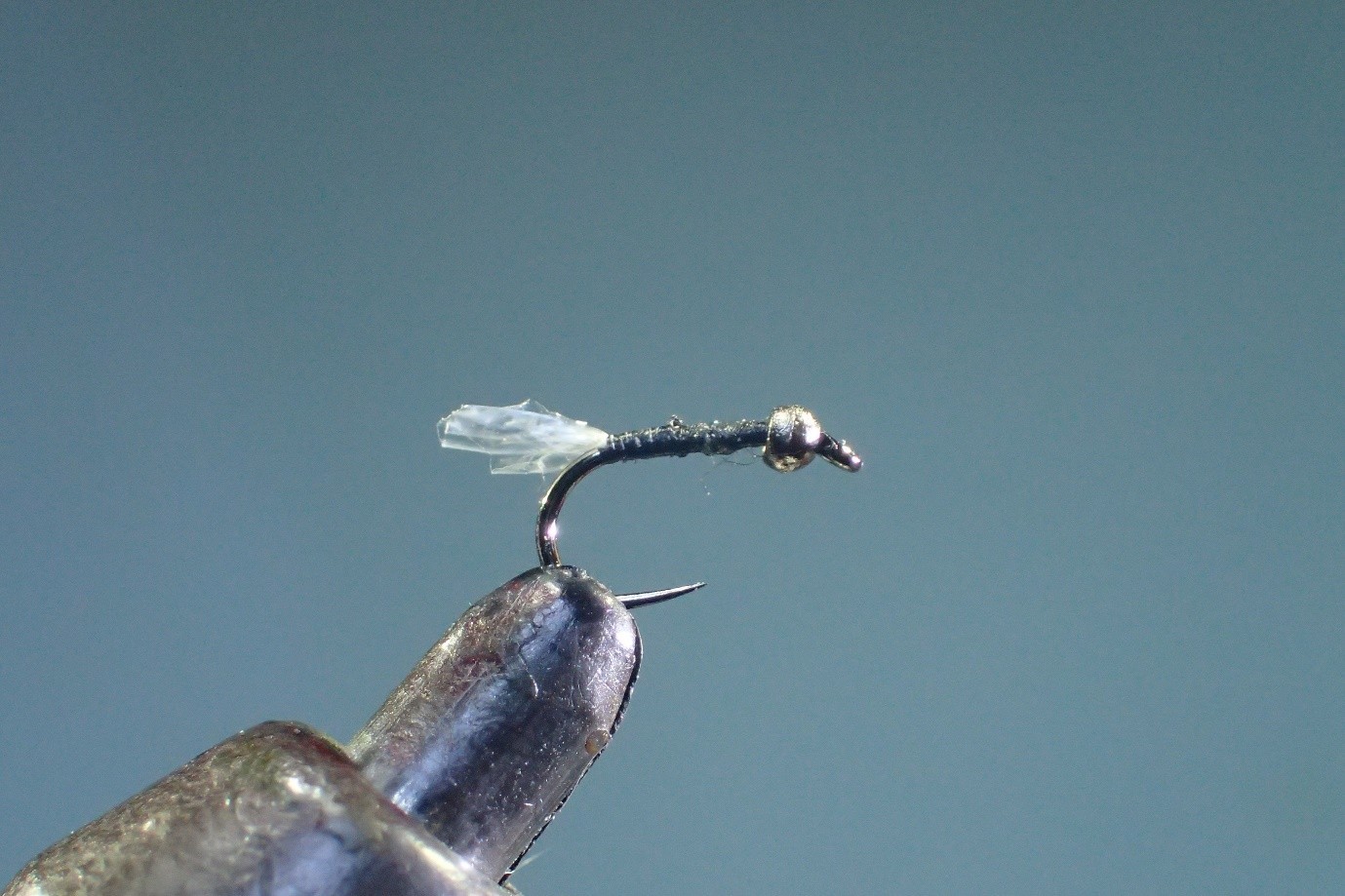 Step 1: Attach the bead to the hook and tie in the plastic to imitate the protruding wing. 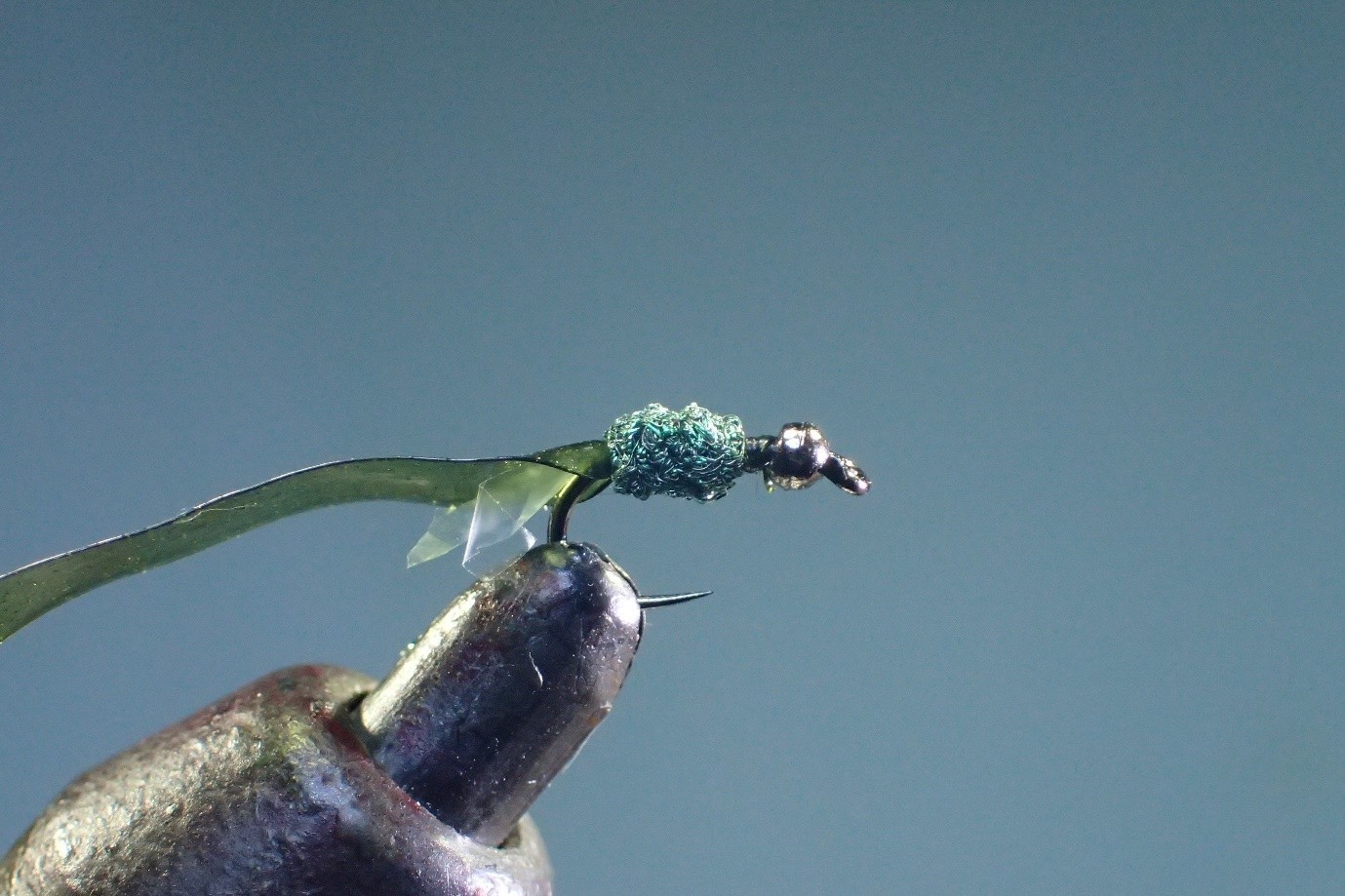 Step 2: Tie in the Scud Back and dub the body 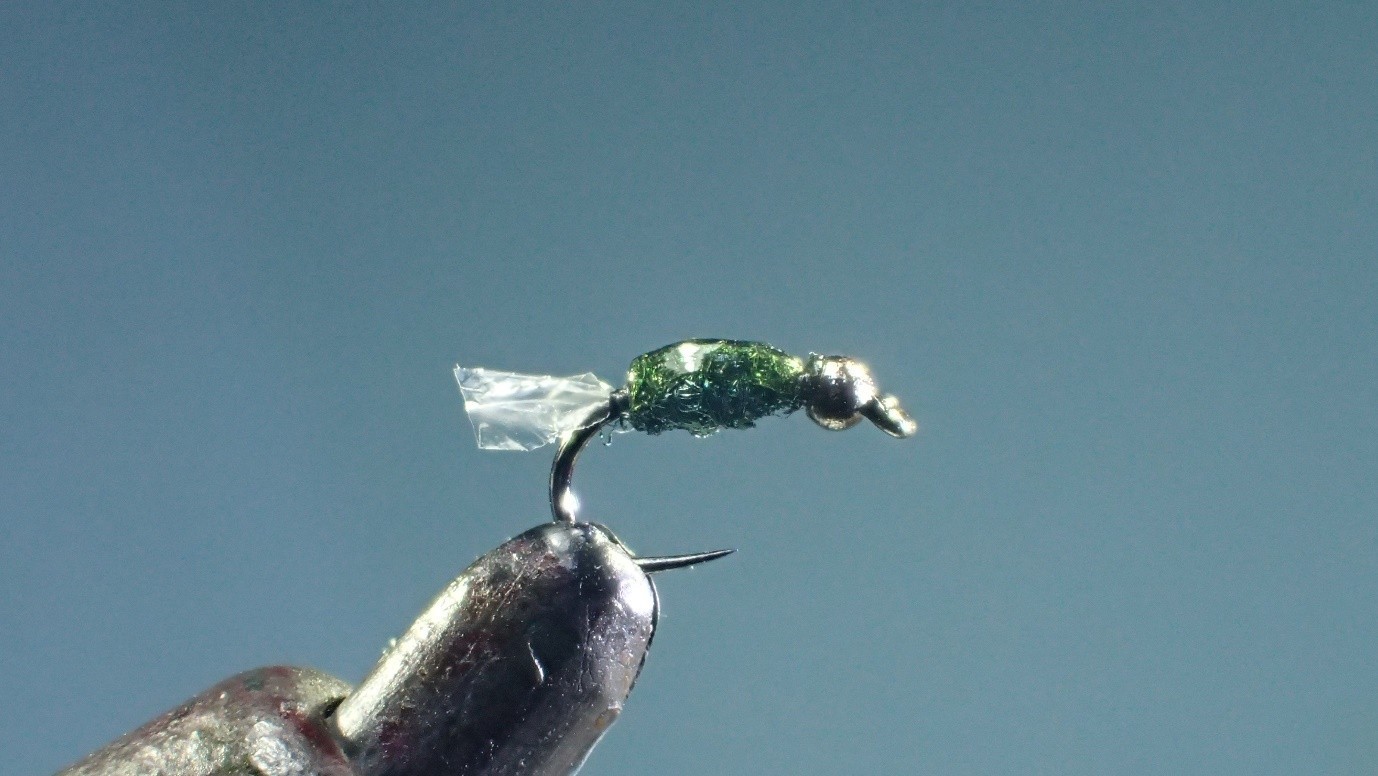 Step 3: Stretch the Scud Back over the body and tie down behind the bead. You can coat the Scud Back with UV light-cured resin to add translucence and make the fly more durable.

Step 4: Attach legs between the body and the bead.

Beetles are seasonal being most prominent in spring, whereas ants are available to trout throughout the year – so why does Gary LaFontaine feel that beetles are better searching patterns?

They provide what he calls a ‘big chunk’ i.e. more calories per rise. 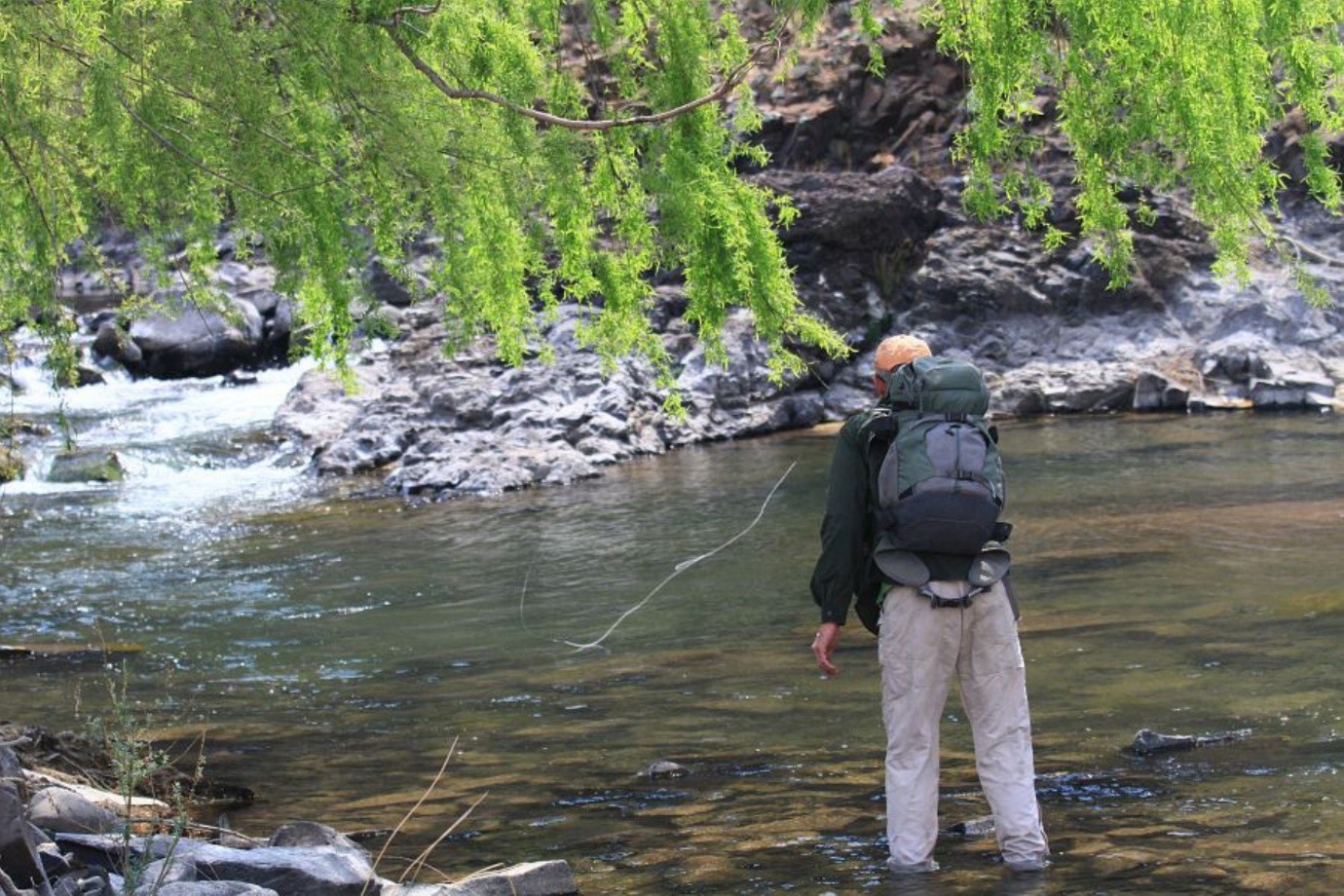 Willows line the banks on the Birkhall section of the Sterkspruit in Barkly East. Photo by Tom Sutcliffe.

On tree-lined rivers like the Sterkspruit in Barkly East, the trout often receive most of their food from drop-in insects like inchworms and beetles.  The stomach contents of a 3 lb trout I killed on Basie Vosloo’s farm, Birkhall, because it was bleeding from the gills contained only beetles and inchworms which were pupating at that time. This despite the fact that the river teems with aquatic insects such as mayfly and caddis nymphs. They, however, are well camouflaged and, unlike the helpless beetle, inaccessible to trout for much of the time. 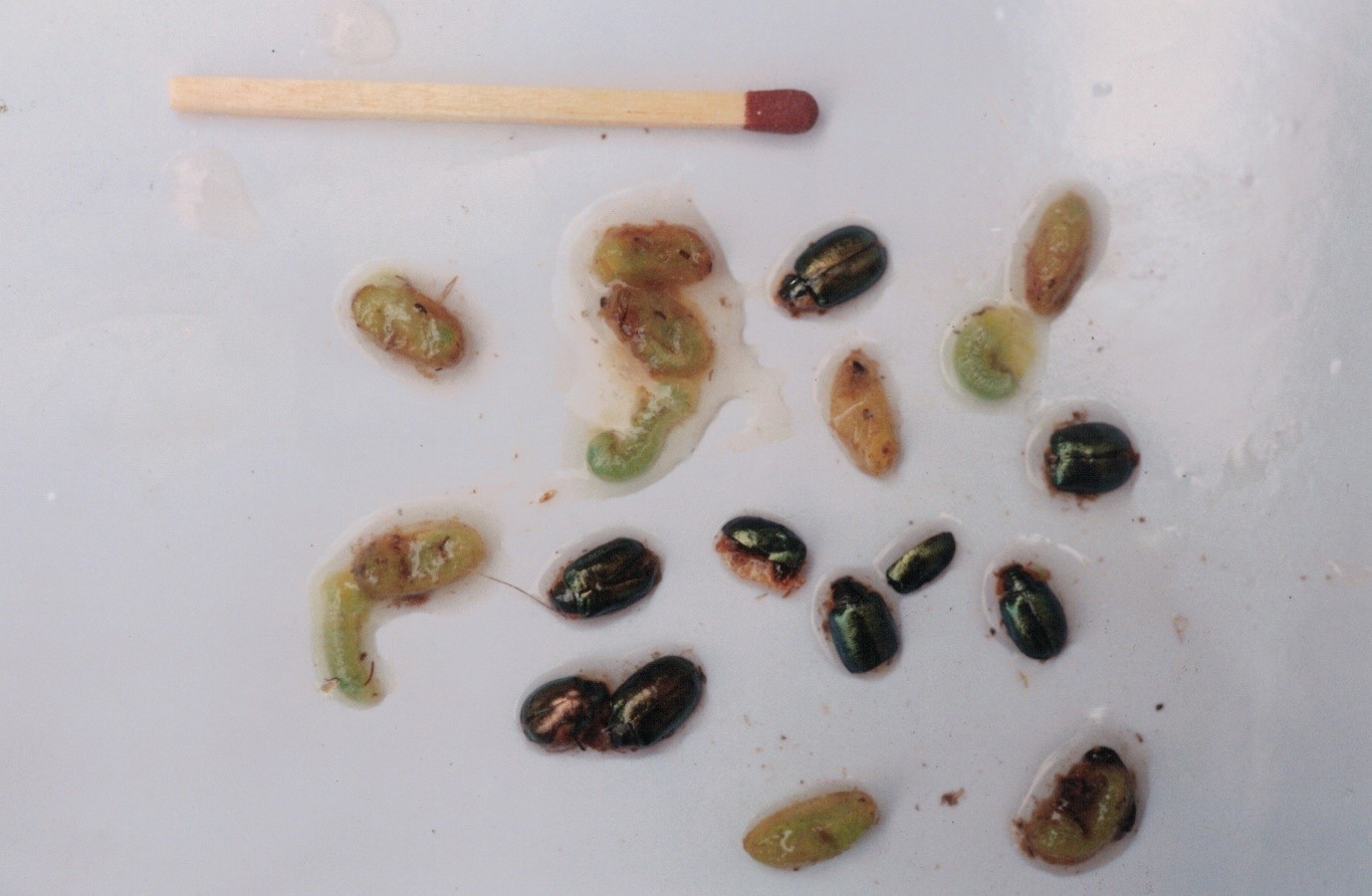 The stomach contents of a Sterkspruit trout caught by the author contained only terrestrial insects.

As far as I can ascertain, the idea of fishing a beetle imitation like the upstream nymph originated in Australia in the 1930s.

The use of an artificial beetle in various types common to the Southern Hemisphere is closely allied to nymph fishing.

Many of the beetles eaten by trout (at times these constitute 90 per cent of their food) are not water insects but are purely adventitious and purely seasonal in their occurrence.

The ti-tree beetle, which hatches out in December, supplies food for the trout for quite an appreciable period and when at its height is found to constitute almost the entire stomach content of nine fish out of ten.

There are, as a matter of fact, two entirely different beetles that appear on the ti-tree at approximately the same time of the year. At times the ti-tree is so thickly covered with these beetles that the bush seems to be alive. Thousands drop into the water and are eaten by trout as they float down the stream. For a short period the beetle, either natural or artificial, is the only food that will tempt a fish.

On streams that do not usually have much of a hatch of fly the beetle is always welcome as it brings up many fish that would not otherwise show themselves. I have taken trout so gorged with beetles that I wonder how they managed to hold them all. The banks of some of the beautiful Tasmanian streams are lined with a thick growth of ti-tree at the water’s edge and, as parts of these rivers can be waded, very fine fishing is to be had when the beetle appears.

The beetle is tied thus: Bind silk from eye to bend. Tie in a small strip (1/4” wide) taken from a crow feather. Next tie in a short length of black wool and, having taken the silk back to the eye, bind the wool up the shank to within a short distance of the eye. Wind the wool back three parts of the way and then forward again to form a fat body.  Tie in the wool and cut off the waste.

The wet patterns are fished in much the same way as the nymph. If necessary the cast may be greased to the last link and the gut carefully watched for the sudden draw that indicates fish.

Another Tasmanian angler, David Scholes in his book Trout Days (Kangeroo Press, 1986) describes a similar pattern, the Black Beetle which he ties on a #14 hook. ‘The elongated oval body is of black wool over which a strip of crow quill is drawn to the head after the hackle is put on. In this way it becomes a ‘throat hackle’ and is of soft red cock or hen’.

Saying, ‘I’d rather fish the beetle than the nymph’, he adds: ‘As a saver of blank days, the Black Beetle is high on the list. I have unusual faith in the hooking and holding qualities of the Black Beetle. Perhaps this is because of the bold way in which the trout usually takes it and, in consequence, the way in which the strike can be timed so exactly and the hook driven home so solidly’.

This is the identical dressing which Mike Weaver was to use with such success on streams in England and which he described in his 1991 book The Pursuit of Wild Trout.

For some unknown reason, even the most supercilious trout in smooth shallow water is vulnerable to this fly when presented on a long leader with a very fine point.

As I described in my previous article on the Birkhall Beetle on Tom Sutcliffe’s website, that passage inspired my own experiments with the sunken beetle fished upstream using a strike indicator to signal takes. 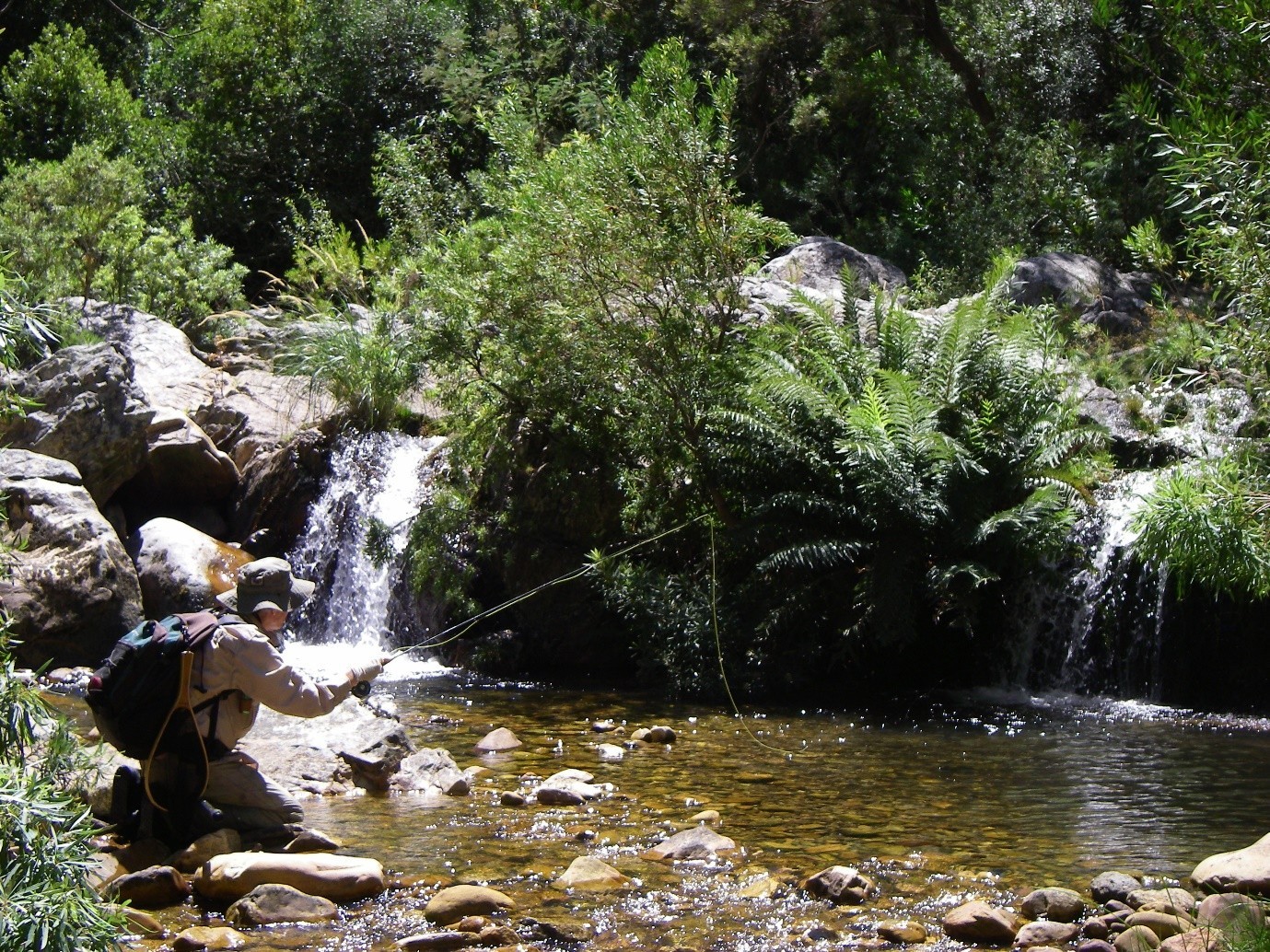 That story is outlined in the chapter on sunken terrestrials in the book South African Fishing Flies ­– An Anthology of Milestone Patterns by Peter Brigg and I. 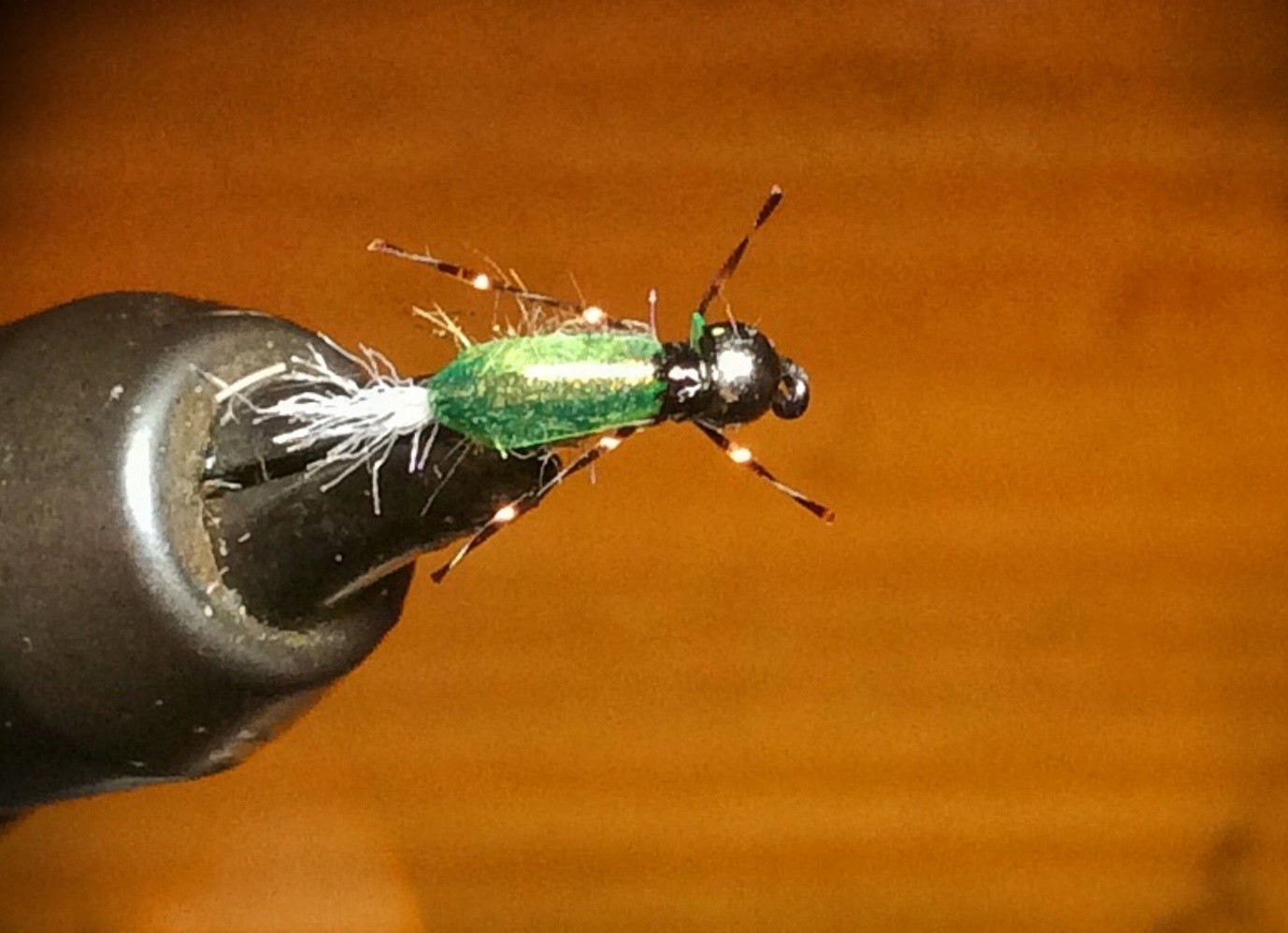 The leaf eating beetles in the trees which line the banks of streams in Barkly East and Rhodes are not much bigger than a match head and 24/0 Semperfli Nanosilk makes it easier to tie small patterns like this.

Barkly East and Rhodes in the north-eastern Cape are our version of Montana and more information can be gleaned on the website of the Wild Trout Association.  The Birkhall section of the Sterkspruit can be accessed through Basie and Carien Vosloo and their Gateshead Lodges website.