The Sawrtberg is a special place. Driving out of Underberg the landscape quickly changes to rolling hills, grasslands, and expansive pieces of water. The Swartberg is home to some of South Africa’s biggest trout and we are lucky enough to have access to these amazing waters. Over 100 fish were landed during the first trip, with the biggest of the trip pushing that 10lb mark. Trip 2 promises to be even better as winter is now in full swing! 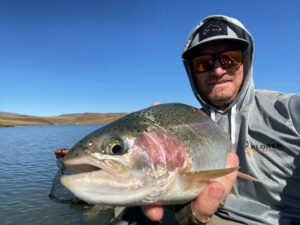 After a short drive from the amazing @valley_lakes_underberg the anglers arrived at one of the private dams. Covered by a blanket of mist the dam looked prime. Day one’s dam is an imposing dam. It is large with expansive weed beds and under water structure.

After a quick coffee and strategy chat, the gents launched. The morning started off well with a few big fish coming to the net.

As the sun made an appearance the fishing slowed down. The gents still got stuck into some amazing fish, with the biggest of the day coming in at 64cm and close to 9 pounds!

The day ended off with an icy wind and some even colder beverages. The Swartberg private waters continue to produce some amazing fish.

Day 2 meet the group with bright blue skies and not a puff of wind. Given the overhead weather it was surprising to see the grass at Valley Lakes Cottages, Underberg covered in frost. Winter is truly here! After wiping the ice of the windscreens and letting the bakkies warm up, the group was off…

Day 2’s dam is even bigger than Day 1’s. It splits into 2 fingers that one would struggle to cover in a full day’s fishing. The dam is a angler’s heaven, large weed beds, gravel beds, a big wall and even cliffs that from one of the dams banks. These big dams can be intimidating although with a few pointers from the hosts the group launched to tackle this amazing piece of water!

It wasn’t long until we heard the first screams of “ON”. Not far from the launch site the group started picking up fish of reasonable size. The fished seemed zoned in on natural patterns fished slowly tight to structure. At around lunchtime the wind started to blow. This was a relief for most, except for those who had to kick back for lunch. The wind seemed to help the fishing with the group converting fish on a regular basis.

As the sun started its decent, the wind died, and the smaller fish seemed to turn on. Not far from the launch, the group got stuck into some pretty looking fish. Silver, deep and most importantly strong as anything.

Sticking to the game plan everyone got some amazing fish on Day 2. Nothing as big as day 1, although the numbers increased, and everyone came off the water happy! Not to say one or two of the guys got taught a lesson during the day, these fisherman’s tales were enjoyed over a cold one back at the bakkies. Luckily for the gents they got to do it all again on Day 3! 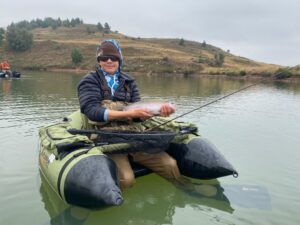 The Swartberg truly had its blanket on for Day 3. The morning greeted the group with overcast and misty conditions. This was promising as the previous 2 days the sun had been out in full force.

Day 3 saw the group split up, targeting 2 smaller dams in the Swartberg area.

After a nervy drive through the mist and maize fields the 2 groups arrived at their dams. Day 3’s dams were different to those before them. Smallish, heavily weeded and big gravel beds. We were surprised to see no fish cruising the edges, although they were boiling on the edges of weed beds. Rises were not uncommon, and everyone tackled up hastily.

The morning was awesome. Everyone got good fish and awesome numbers came out. The biggest of the morning coming in at 60cm. A cock fish, bright red and ready to get his business done. This morning really rounded the trip off, everyone was happy, and lunch was an easy affair to enjoy.

As the afternoon rolled in the clouds disappeared and the sun began to shine. Again, like the previous days this seemed to push the fish down. Hugging the bottom and super picky the fish slowed down completely. A few bonus fish were landed, although nothing like in the morning session. 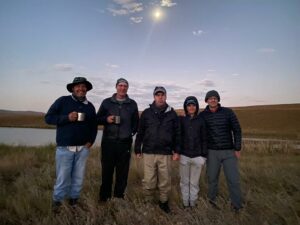 As the sun began to sink behind the berg so did the end of the first Swartberg trip. From the Xplorer team we would like to thank the awesome group! The first trip is always challenging, and the group fished as well as anything. The Second trip is just around the corner and luckily for us we get to do it all again soon!