Preparing for a trip to the unknown is always a challenge. The Wildfly crew had been invited to Nkamba Bay Lodge situated in the Nsumbu National Park on the shores of Lake Tanganyika in Northern Zambia. 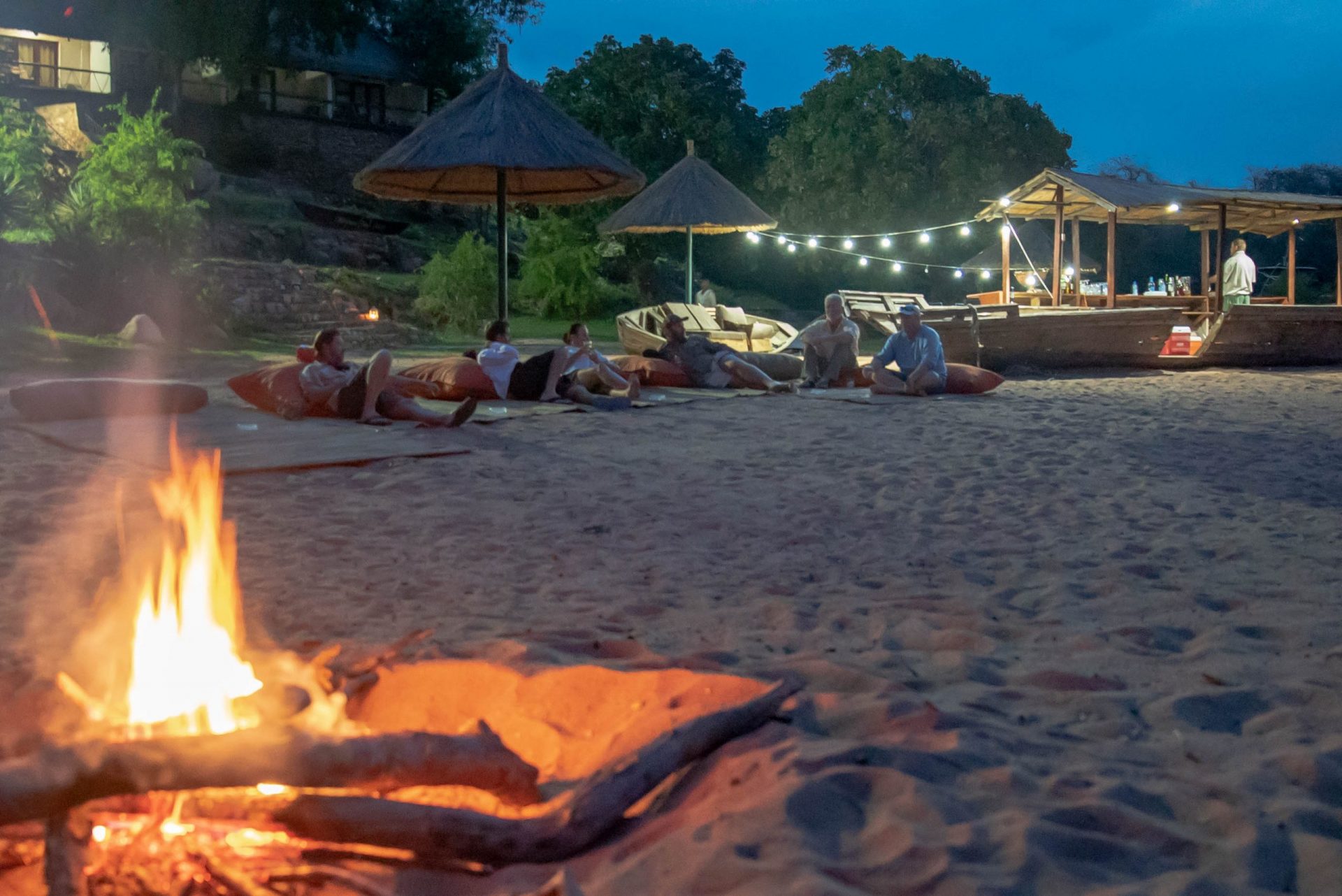 The thought of fishing the longest fresh water lake on the planet with over 350 species of fish was quite daunting. The main target species on fly are the four species of Perch, Tiger Fish and the Nkupe, one of the biggest Cyclids in the world. Preparing the fly boxes for so many different species had me up weeks before the trip strapping up an assortment of flies, from a large range of Brush Flies, Clouser Minnows, Shrimps, Crabs and some surface poppers and Gurgglers. We packed a range of tackle from our  T-50 5 weights to 9 weight rods, a full range of Rio fly lines from floating to the Rio Leviathan 350 grain sinking lines. 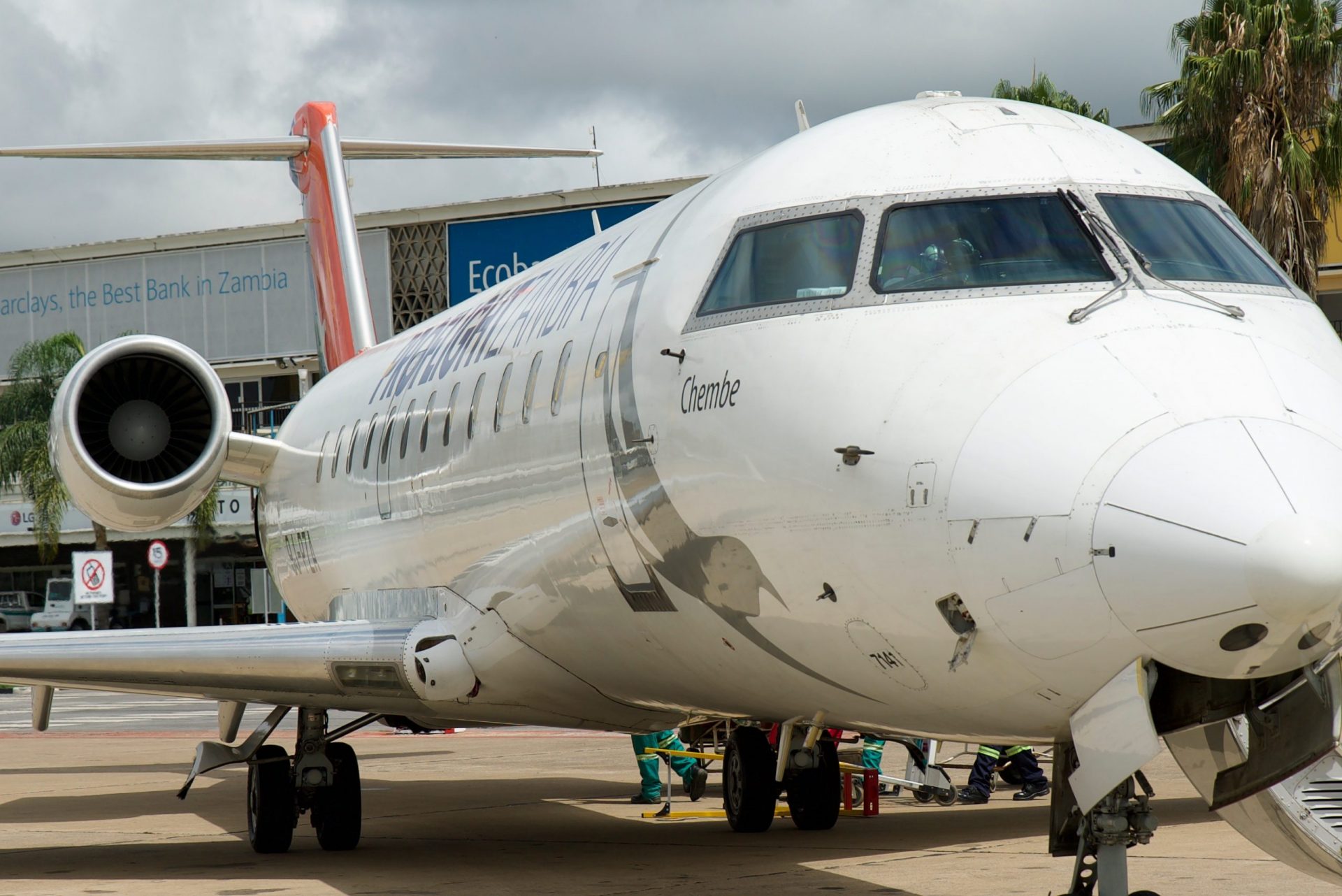 We boarded our Airlink flight from Johannesburg to Lusaka, enjoyed an overnight stay at the Palmwood Lodge.  We were up early the next morning after a few late night beers with the boys and onto our next flight to Kasama airport, via a private charter onto Nkamba Bay lodge. The scale of Lake Tanganyika, as we approached Nkamba Bay Lodge was mind blowing. It’s a body of water, crystal clear with rocky boulder Islands scattered off of the white sandy beaches. 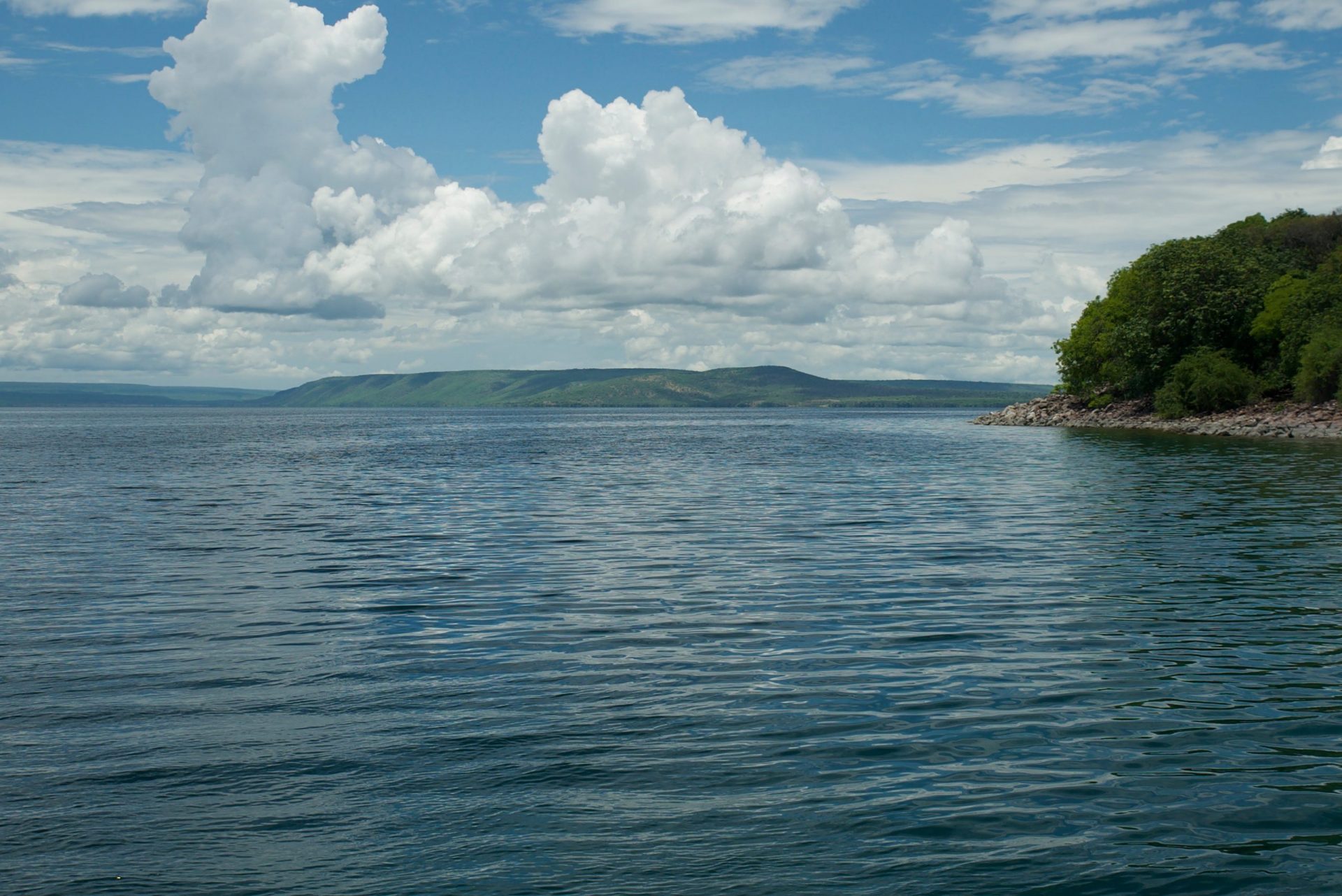 The weather was absolutely perfect as we headed out in search of new species to target on the fly. We rigged our Xplorer T-50 9 weight outfits, one with the Rio Leviathan 350 grain sinking lines and the other with the Rio Flats Pro floating lines. The main target species was the Tanganyika Perch often confused with its close relative the Nile Perch. We started our first drift along a rocky outcrop casting a chartreuse clouser into the deep water, giving them enough time to get down into the depths. Within a couple of casts the shoals of salmon perch could be seen following the flies up from the depths, all very visual with the clarity of the waters. It wasn’t long before something ate the flies and the lines went tight. With so many different species of fish every cast produced something new and different.

I started off fishing straight mono without Rio Power Wire as I had heard the Tiger Fish were few and far between. After a couple of casts around some promising looking structure the water exploded with the line burning through my fingers. A jump in the distance was a massive lake Tiger with some jewelry left in its mouth. We converted back to the Knottable wire straight away. We cover the water catching an array of different Cyclid species literally cast for cast. Some of the most interesting fish species we had ever seen, not knowing what half of them were. 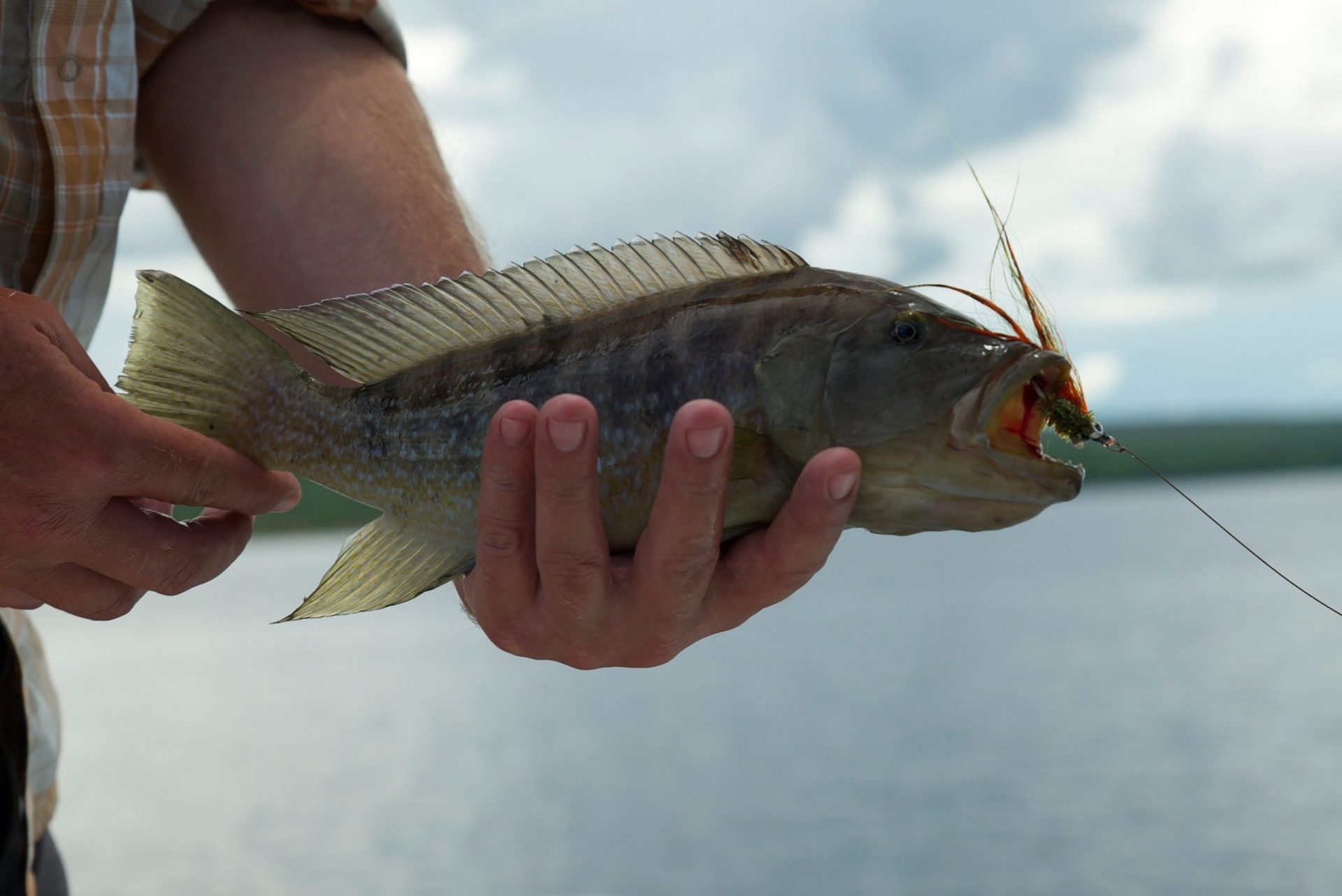 After a full day on the water and getting a better understanding of how this vast volume of water worked, we decided on tackling the large shoals of Nkupe that were herding massive bait balls of Kapenta to the surface. We rigged our floating lines with poppers and started sight fishing to big shoals moving through. They absolutely loved the poppers and we had some of the best surface action you could experience. The Nkupe is an aggressive fish and a strong fighting fish for their size. We caught them literally on all different styles of flies but the surface action was out of this world. The main target specie, the Tanganyika Perch, was still playing hard to find on the flies as we were not getting down to them. We decided to concentrate on water depths that were realistic with getting a fly down to and concentrated on fishing water depths of max 20 meters. A couple of drifts along a sandy bottom bank with heavily weighted Clouser Minnows and my line went tight, a big bend in the rod and few heavy head shakes. The battle was on with long runs and a dogged fight. The sight of this Perch as it came to the surface had my adrenalin flowing through the body. 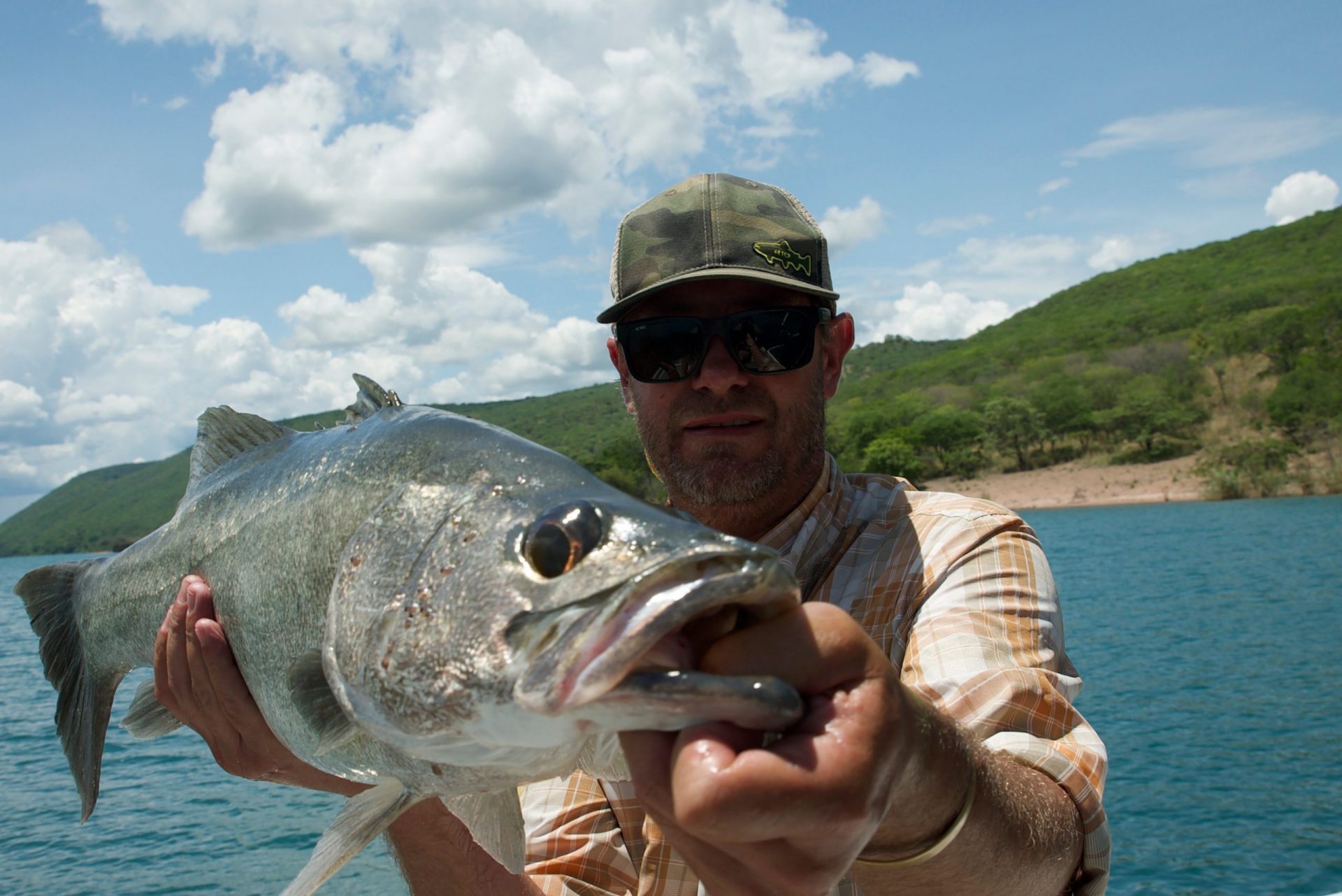 After a couple of pictures we managed to revive her, the problem with fighting these amazing fish is the barometric pressure, bringing them up from the depths causes a big problem with their swim bladders.

I have been planning to get back to this amazing fishery in the near future to spend more time in search of the Tiger Fish that I now know exist in this massive body of water.

Zambia has protected this piece of the lake for many years now so the future looks great for Nkamba bay. The majority of Lake Tanganyika has been netted and fished out, with this small section of the lake under protection from ZAWA I believe Lake T will survive the over fishing and netting.