I was recently fortunate to visit the Afro- Montane rain forests of the Ragati Conservancy, with the Wildfly crew. Fishing for Rainbow Trout on the equator was something I was trying to get my head around. The thought of catching trout in these amazing forests with Leopard, elephant and buffalo roaming around the forest floors, I don’t think there is another place on this planet were you can find all of this in one place.
On arrival to the majestic Mount Kenya, I was blown away by the forest and the sounds that were cried out by the Tree Hyrax as the sun started to set in the distance. We were a little late to wet a line so we settled into our new log cabin adjacent to the Regati River and prepared our Fly Tackle for the morning.

The next morning we enjoyed a breakfast, prepared by James Dennis from the Soames Hotel, just outside the town of Nanyuki and we were ready to hit the water.
A quick drive down stream to an accessible clearing and we were at the river, rearing to get my first Ragati Rainbow. Tackled up with a 9ft 4 weight Xplorer T-50 sample I am testing for the range, matched with a RIO InTouch Trout LT fly line, a perfect combination. Gareth and I split up as the waters are thin to give ourselves enough water to fish on the way back to camp. It wasn’t long and my Burrowing Dragon was smashed by a small Ragati rainbow that shot out from an undercut bank, fat as a football and all of 10 inches. A couple of casts later and I landed another fish around the same size. Nymphing upstream produced most the morning fish, landing a handful of trout in the 10 to 15 inch size. The conditions were tough with most of East Africa going through one of the worst droughts in history. Waters were thin and most the fish were holding in the deeper sections and in the under cuts of the banks. My choice of tackle at times wasn’t the best, fishing a 9 foot rod in these tight areas made for some challenging casting. Most the casts were roll casts as the vegetation can limit you to the right zones. 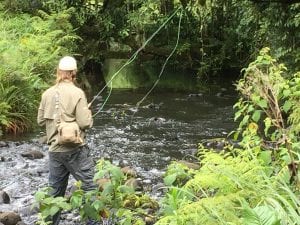 On my way upstream, the river started to change as the gradient got steeper and the forest canopy a lot thicker. The challenges grew with my 9 foot rod as every vine seemed to be in the way of my next cast.
I met up with Gareth further upstream and decided to call it a morning and head back to the comfort of the lodge for a lunch and a new outfit to take on the challenges of the forest.
Back on the river before the food had time to settle in my stomach, with 10 km of river to discover within the conservancy, we headed back to where we had left off. This time with my Xplorer Guide 7’9 inch 3 wt rod. A couple of casts up stream in some deeper slower water and my line went tight, on this light tackle the fish were full of steam as they fought hard in the cool glacier melt water. I landed my first Ragati Red as they are called up here, in what looked like full spawning colours. A stunning Rainbow Cock fish with a kype on it like I have never seen before.
With the water temps staying cool all year round, even right on the equator these fish are in their prime, fin perfect and full off steam. The water temps range between 10 and 15 degrees Celsius all year round making the Ragati River perfect for these rainbow trout. Only two percent of the Ragati rivers flow comes from the glacier melts and Mount Kenya has 11 glaciers on her. 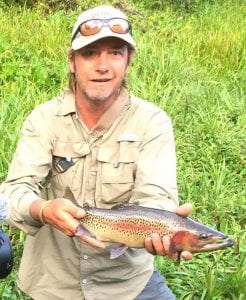 Brad had decided that the river and her stinging nettles were not his game so he headed off to a lake further downstream to see what lurked in these waters. After fishing hard and covering the waters of this stunning mountain Lake Brad finally got some interest and was in for a tussle as his line tightened and the fish broke the water, thrashing its head trying to dislodge the fly. A couple minutes later he landed a stunning Ragati red in his prime!! 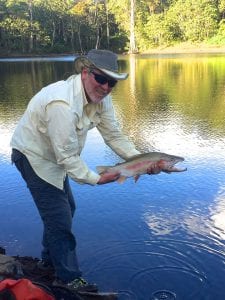 Two days of fishing in this stunning Montane Forest was an experience of a life time. Something I will remember for years to come and hope one day I get back, sooner than later.
A big thanks to the staff of the Ragati Conservancy and to James Dennis for the delightful food.
Brendon thanks to you for putting this trip together.
HAPPY DAYS !!!