Situated in the Heart of Northern Ireland, and covering a total area of some 151 square miles (392 km2) lies the largest body of freshwater in the British Isles, Lough Neagh. It is about 20 miles (32 km) long and 9 miles (14 km) wide and at its deepest point, about 80 feet (24 m). With regards to fly fishing, Lough Neagh does not share the same reputation associated with the central and particularly, the Western lakes of Ireland like Sheelin, Corrib, Carra, Conn and Mask, to name but a few. These lakes are revered the World over for the quality of fly fishing which they offer, particularly at Mayfly time. Lough Neagh, being situated further North, does not see this well-known Mayfly hatch, but it’s dark and silent waters hold a secret…one that’s only spoken about in hushed tones and trusted company…The Mighty ‘Dollaghan’ Trout.

The Dollaghan (or Lough Neagh Brown Trout) gets its name from the old Gaelic word meaning ‘swift running’ and is endemic to the Lough and only a handful of rivers in the Lough Neagh system. These rivers see a run of these fish from July onwards every Year. Genetically, the Dollaghan is a migratory form of Brown Trout, much the same as the better-known Sea Trout, however, it runs into lough Neagh, rather than the Sea. So effectively is a land-locked Sea Trout. These fish can reach staggering proportions, averaging 3-6 lbs and a few of over 20lbs have been caught over the last number of Years. 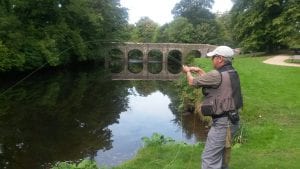 The tactics used to fish for Dollaghan would be much the same as those employed by anglers targeting Sea Trout. Weighted Nymphs throughout the day (although a Daytime-caught Dollaghan is a rare treat) and once darkness falls it’s time to scale up the tackle, put on a sinking poly-leader and fish a team of duo hairwinged salmon/seatrout patterns on smaller sized single or double hooks. The old faithful sea trout wet flies, such as the Alexandria, different Butcher variants and Teal Blue and Silvers will all work well for the dollaghan, but specific patterns are now starting to be developed and tied by local dollaghan fly fishers and most are tied on smaller (size 10,12 and 14) doubles and incorporate a flashy body and mixed hair wings. As far as colour, this is a matter of personal choice and it doesn’t seem to make as much of a difference as size etc.

Equipment for the river angler targeting Dollaghan trout would also need to be a tad heavier than one would normally use for river fishing. As you can never be sure if you’re going to get picked up by a 2lb fish or a 20lb fish! I would happily recommend a 9 – 10ft, 4 or 5wt for the hours during daylight and into the evening, when you will mostly be nymphing. Come dusk, the chance of a more substantial fish along with the increased risk of snagging in the dark calls for a heavier set-up. Most folk opt for a 6wt or 7wt outfit, intermediate, sink tip lines, or sinking poly tip and leader of between 12 and 15 lbs breaking strain…and sometimes that’s not even strong enough!!! The Xplorer T50, 9ft 6wt is, in my opinion, the ideal all-round dollaghan trout fly rod.

There’s no need for double-handed or switch rods, as the rivers are not very wide and lend themselves perfectly to the use of a single hander. Most casts are made across river, with a mend or two put into the line after delivery, to minimize drag and allow a bit of time for the flies to sink. The flies are fished as they are on the swing. Fishing upstream in faster water can produce great results, but is not the easiest (or the safest) in the black of night! It pays to walk the stretch you intend to fish before it gets dark to prevent and mishaps once night falls, and I would recommend keeping wading to an absolute minimum after dark and fish from the bank as far as possible during the night.

While night time fly fishing may not be everyone’s cup of tea, there is something truly special and electrifying when setting the hook into one of these monster trout, and only having moved to N.Ireland 5 years ago, it’s all still reasonably new to me too. Once you get over the initial hurdles associated with fishing at night, such as distance perception and knotted leaders etc this form of fly fishing provides an anticipation and excitement that is impossible to describe. 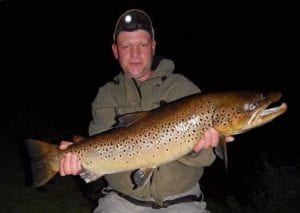 Local Specimen Dollaghan fly fisher, Derek Bell, with one of his ‘bigger’ (but not biggest!) fish of the 2016 Season. The most productive time to target the bigger fish is from dusk into the wee hours of the morning. 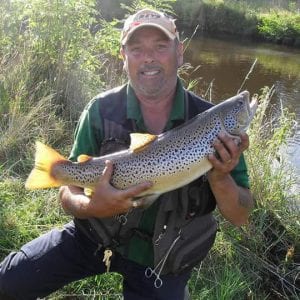 Good friend, Jeff Cairns, with a rare treat. A daytime Dollaghan Trout from the Sixmile Water. Best results are had after rain has raised the river levels (note the slightly discoloured water) 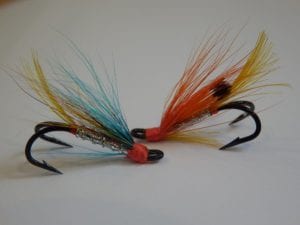 Smaller hair winged flies are used during the hours of darkness. Above are two  of my favourite patterns, incorporating dyed squirrel tail wings. 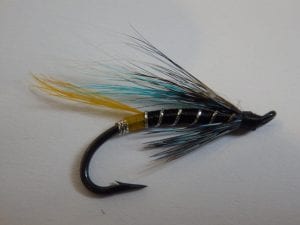 One of my favourite patterns for the Dollaghan trout, especially during low water conditions is the Blue Charm tied on a single salmon iron, again in smaller sizes 10’s and 12’s. 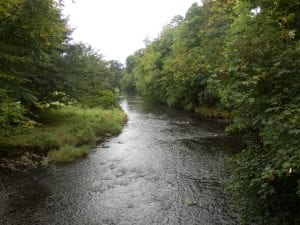 Ideal Dollaghan Trout water on the lower reaches of the Sixmilewater. This stretch of river is situated only half a mile up from its estuary on Lough Neagh.