The fly fishing world has changed vastly since I picked up a rod some 30 years ago. The rods and lines are far more technical and have probably improved our experience. Even the clothing is now referred to as ‘technical’. We don’t even store flies and tippet in jackets any more, hip packs and sling bags are way cooler when taking pictures. But technology and fashion change and advance in every part of life. The fly-fishing world however is unique, it has moved into an entirely new orbit.

What was once a parochial hobby is now a cutting edge pursuit. A fly-fishing video used to be a grainy Joan Wulf casting tutorial. Now there are iconic documentaries and global film circuits branding fly-fishing as the new must have skill and adventure. Climbing Everest is for the bankers who caused 2008. Running down a beach in the middle of the Indian Ocean waving a fly-rod is the new cool.
Trout are also out. Well not out completely but they are fast becoming passé. Now everything from Barbel to Broadbill are what you need to get some damned attention!

So when you go into your local fly shop and start picking out red-eyed damsels and 5x tippet you aren’t likely to receive much attention from the shop staff. Who needs a Mrs. Simpson in Barotseland or Bolivia?
There is however a trout fishing destination that kinda fits into this tattooed, cocked fist culture wave of modern fly-fishing. It’s extremely remote, your tackle will perish, the fish are freaks and very few people have even been. You will catch Rainbow trout, but they aren’t boring. It’s called Kamchatka and you should go.

The Kamchatka peninsula lays out into the northern Pacific Ocean on Russia’s Eastern coast. Just ‘across the pond’ from Alaska. It’s the size of France and has 400 000 people living in a few small towns on the coast. The interior is covered by hundreds of volcanoes, 100 000 rivers, forests and swamps. No roads. No people. The only population that counts is the largest concentration of Brown Bears in the world.
It’s so untouched it spent the last few centuries recognized by Russians as ‘the least hospitable place in Russia’. Read that again in case it didn’t sink in.

Four of us left for Kamchatka at the beginning of August after 2 years of planning. Two of us were from South Africa, one from Zimbabwe and one from Houston, Texas. We were also joined by two gentlemen from North Carolina in Petropolovsk, the airport town of Kamchatka. After an hours helicopter trip beating our way in between snow rimmed volcanoes and mountain ridges we descended into our first of six riverside camps that will keep you fed and rested for the next week.

The tour operators advise you take either 7 or 8 wt rods, 0x leaders and fat, heavy salt water streamers. Just to remind you this is not nymphing on the Smalblaar, the guide arrives and cuts off the first three feet of your tapered leaders. Keep the tippet in your suitcase.

My friend and Xplorer brand ambassador Jeremy Rochester recommended that we take Xplorer rods. I have never had cause to buy a 7 or 8 weight rod before but having a value option come well recommended, I guessed they were worth a try for a 6 day fishing trip. Out of the 8 rods we took, 5 were Xplorer Guide II and the others were of more illustrious heritage.

The fishing is physically hard. The Zhuponova hosts arguably the most salmon of any river in Russia, the biggest Rainbow trout I could imagine and a unique sea run Asiatic Char species called a Super Khundza. The Khundza are big and average around 15lbs. They use the river and pull like donkeys. I fought one for almost 50 minutes and it wasn’t even a big one.
While the smaller fish of the Zhuponova are rising on insects throughout the day, the big fish are after heartier meals. You will only cast fat and heavy streamers and mice pattern ‘flies’ if you are after the trophies. The mice fishing was something I was slightly sceptical of. But after walking up a creek on my first afternoon I landed a 30 inch rainbow on a mouse. It smashed the fly and fought me so hard I had to beg the guide to stalk it from behind and net it 20 feet away. Mice make Rainbow Trout mad. In comparison to Alaska you are actually throwing attractor patterns to fish. ‘Flesh’ flies work but the fish on the Zhuponova are top end predators, they want to see their prey moving and then they want to smash it. No different to Tiger Fish. 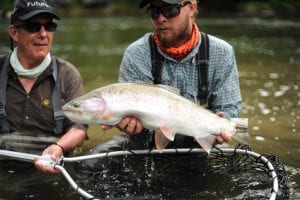 The volume of fish and big fish is extraordinary. You will shake Dolly Varden off the hook all day long, many of which are so big you feel you have lost all sense of reality. Pink, chum and king salmon curl in front of the raft and litter the banks. You will catch 10 to twenty big bows between 20 and 30 inches every day. There is almost nothing smaller! A few 30 plus inch fish will hook up and break you up every day. Holding on to them takes some skill and luck, mostly luck. The big Super Khundza require herculean efforts if you are not drifting. These are beautiful, rare and powerful fish. More should be made of them. 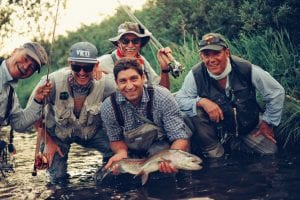 The fishing is better than all the movies and documentaries and interviews and articles would have you believe which I think is pretty special! The only problem is tackle. We broke 4 rods on our trip. We went through three sinking lines in three days. We ran out of 0x leader by day three. Dalai Lama flies were traded like rifles on the Eastern Front when the Germans were coming.
The Xplorer Guide Series II 7-weights were incredible. All our other rods broke. You may or may not have previously experienced the anxiety of being three days into a fishing trip 15 000 miles away from home and only having one rod and line left. But if you haven’t, it’s crippling. The Xplorers Guide II Rods kept on shouldering the expectations of two years of excitement, they kept on hauling heavy sodden flies from one side of the river to the other, they kept on whipping hooks off rocks and logs and they kept on bending double on leviathan fish. It is a truly great rod, I am extremely grateful I bought one and when I go back I am taking two. 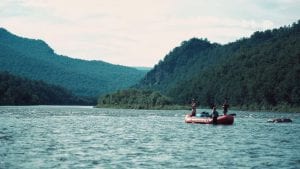 The Zhuponova River is a lifetime experience. A beautiful and wild country that has born no visible impression by humans or the modern world. You will drift past grizzly bears whilst fishing every hour. The forests and volcanoes are a magical accompaniment to a river that changes every day. From small entering creeks, slow pools and braided channels to granite boulders and rapids and wide runs of scenery that would make the grandest of rivers in North America weep. Every night you stay in warm cabins surrounded by meadows of wild flowers, blooming fire weed and birch trees. And In amongst all of this you sleep soundly in the knowledge that trout fishing is cool again.