It’s always exciting when a private farm offers the opportunity to the public to have a fly fishing compo on their pristine waters in the KZN midlands. 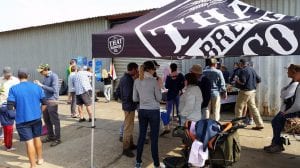 Ivanhoe farm in the Dargle area of KZN opened up their waters on Sunday 11 September 2016 to the general public as a fundraiser to a local school. They are planning to take the kids on a school excursion to the beach as they have never had the opportunity to go before, so this was a worthy cause to support. Entrance fee was R300 which included a goodie bag as well as breakfast and a lunch pack. 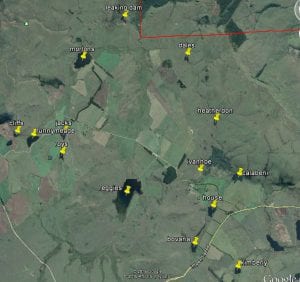 Ivanhoe Farm has 14 dams on the property all stocked with trout ranging in size from 2 hectares to 25 hectares. The dams are all very different layouts ranging from very weeded float tube only to the higher altitude dams with no weed and very bank fishable.

I was fortunate enough to stay over the Saturday night in a small cottage on the farm and took the family up for the weekend. The weather on the Saturday preceding the competition was miserable, it was wet and cold! The temperature never reached higher than 7 degrees C with the wind chill pushing it below zero. A warm fire and red wine was the order of the day on Saturday. We did have a bash at the evening rise on a nearby dam but that only lasted 45 minutes before we were drenched and frozen.

Sunday morning was a lot dryer but the wind was still howling at 30 knots so it wasn’t the best conditions, but spirits at the registration were high and everyone was amped to get out on the water and see what lurked in these waters.

The competition kicked off at 8am and was to end at 2pm with a braai and prize giving.

Because it was more of a social fundraiser there were no allocated dams, you could choose which dam you wanted to fish. Fishing was extremely tough with the wind but we had some gaps in the wind during the morning and the sun eventually came out . 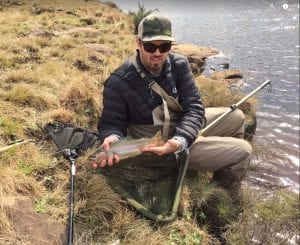 I choose to go up to Dales dam with my dad, it was 1 of the 2 float tube prohibited dams for the day with the majority of the guys on tubes going to the bigger dams, in search of a 10lb fish. Dales is a long thin dam about 500m long and 60m at its widest with a strong river flowing into the dam. I managed 9 fish by about 12: 30pm. I fished Rio’s new Xtreme Indicator fly line with Rio Flouroflex plus 4X tippet material. I fished an egg pattern and a black Ptn #16, fished static over a nice drop off. The fish ranged in size from 38cm to 46cm, all healthy fish, still in full spawning colours and super strong. My dad fished a Mrs Simpson and caught 3 fish, lots of them chasing to the edge but not committing to the take.

The guys generally battled on the day, of the 30 odd participants most came back to the weigh in with a blank. I don’t think this was an indication of the farms fishing potential, but rather a case of the anglers getting beaten by the weather.

Spirits were high at the prize giving and some items were auctioned off to raise a little more money for the school. Lunch was borie rolls and craft beers, which went down well after a long windswept morning.

Biggest fish of the day went to Terry Andrews fishing one of the bigger dams lower down on the property. It was a beautiful rainbow hen of 62cm caught off of his float tube. Terry was fishing his famous self-tied hybrid dragon fly imitation. 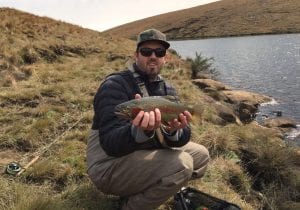 The prize for the most number of fish caught and released went to myself, with 9 fish and 2nd most went to Grevin Price with 3 fish. 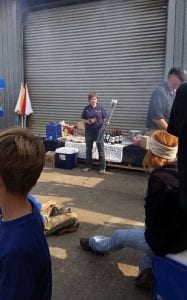 All and all a good day out on the water and good fun had by all hopefully this can become an annual event on these waters.