Being a guide on Alphonse Island in Seychelles, I only get one day off a week, so I make it count. It’s normally on my own because the other guys are out on flats guiding clients.

I took one of the skiff and ventured out on a secluded flats of Alphonse island to try and put a bend in my rod.  I try not to walk too far on my days off, as I do enough walking during the week. Standing at a cut and waiting for the fish to come to you is an essential way to target fish. So I quickly anchored the skiff and waded out to an amazing gap in the surf and waited. I carefully watched every wave as it lifted, hoping to get a glimpse of a cruising GT.  I looked to my left and spotted a nurse shark with about 8 GT’s on its back.

I turned around and loaded my Xplorer Guide II 12wt rod with the matching Xplorer XPSS GT 12wt reel and in two false casts landed my fly right in their path. The whole pack of GT’s shot off of the nurse sharks back. Within seconds, I was tight, unfortunately stuck into a smaller GT of only about 70 cm. I landed the fish, not giving him any line and quickly released it. I looked up and saw two bigger fish cruising down the wave in front of me, quickly stripped off some line and made another cast, two strips and again I was tight with another GT, slightly bigger this time at 80 cm.  I quickly landed and released him. It then went a bit quiet. 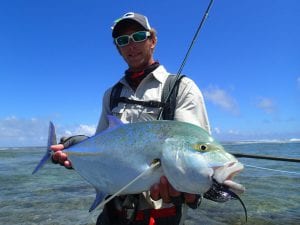 While gazing deep into the waves trying to spot some more GT’s, I didn’t notice the massive Lemon shark that was almost at my ankles. Both us got such a fright, as the Lemon sped off, I managed to get a cast to the two Blue Fins Kingies that were on its back.

This Blue fin Kingie was a super energetic fish, it took me into my backing with some strong runs but was no match for my XPSS GT reel and was soon landed, and release for another day.

The tide had started to rise and pushed me off my spot so I made my way back to the skiff. Before I could reach it, I saw two Rays cruising nearby, there was a pitch black GT just sitting in the middle of them.  Once again I loaded by Guide II 12wt and made a cast about 2m in from of the Rays. The GT came charging, I striped and striped until the fly was right at the rod tip, and then a massive swirl and he ate the fly right at my feet. Absolutely incredible stuff and such a cheeky fish as well. He gave me great fight and after 2 runs I managed to land and quickly release him. 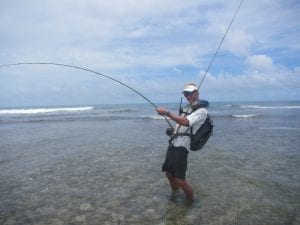 I jumped back into the skiff as the tide continued to push and headed back to the island as it was getting late and I needed to prepare for my new guest the next day.

+ There are no comments