The Marble trout , Salmo Marmorauts , endemic to the western half of Slovenia , have to be one of the most elusive of the salmonid species on the Globe as in the simple fact of if you can’t find them, you won’t catch them. It’s pretty rare that one just wanders onto the river , flicks a line blind and catches a fish. It’s not unheard of though and that spot is normally reserved for friends or partners with the least idea of how lucky they just got.

Marbles have very few spots as far as trout go but rather as the name suggest, they have a brilliant marble pattern which turns out to be one of nature’s best camouflage in the high Alpine Rivers they inhabit. It’s actually due the clarity of the water in these areas, that over time the Marbles lost their spots. Closely related to Brown Trout , Salmo Trutta , they share some very similar characteristics within the way they hold themselves in the river. They tend to hold in and around structure like boulders, undercuts and calmer waters like at the bottom of deep holes or the fringes of rivers. One would think with water clarity of 10 out of 10 that they would be easy to spot. Wrong. They blend and they blend in so well that they hide in plain sight , sometimes even at your feet before they dart off looking for another hiding spot completely spooked out of their wits as you’ve stumbled across them. 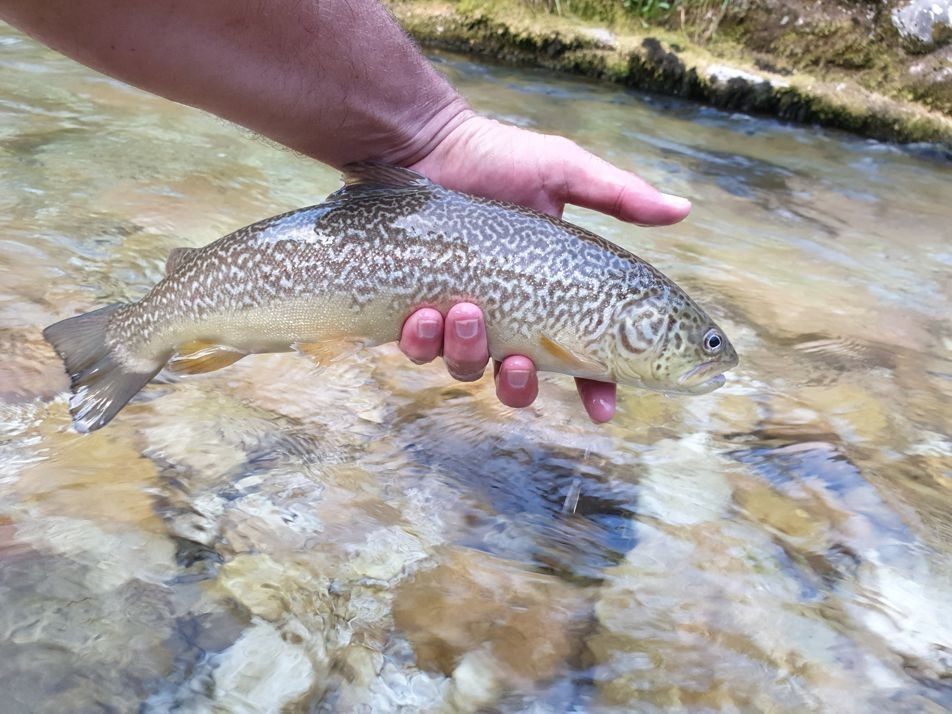 Sometimes you see them and then you don’t……. rub your eyes a bit and look again, its gone just like a ghost. Like a figment of the imagination because of the desire to find these can leave your head spinning. However don’t doubt yourself to much because the chances that it was actually a marble that you saw are pretty good. Over the years I have learnt through countless hours on the water that its best, when getting to the river, to just stop and stare at the water awhile not making yourself obvious for at least 5 minutes. The reason is simple, if the fish have no idea that you are there they will continue as they are and eventually give their position away, leaving you now to decide how to approach the water to put in what you hope will be a successful cast. 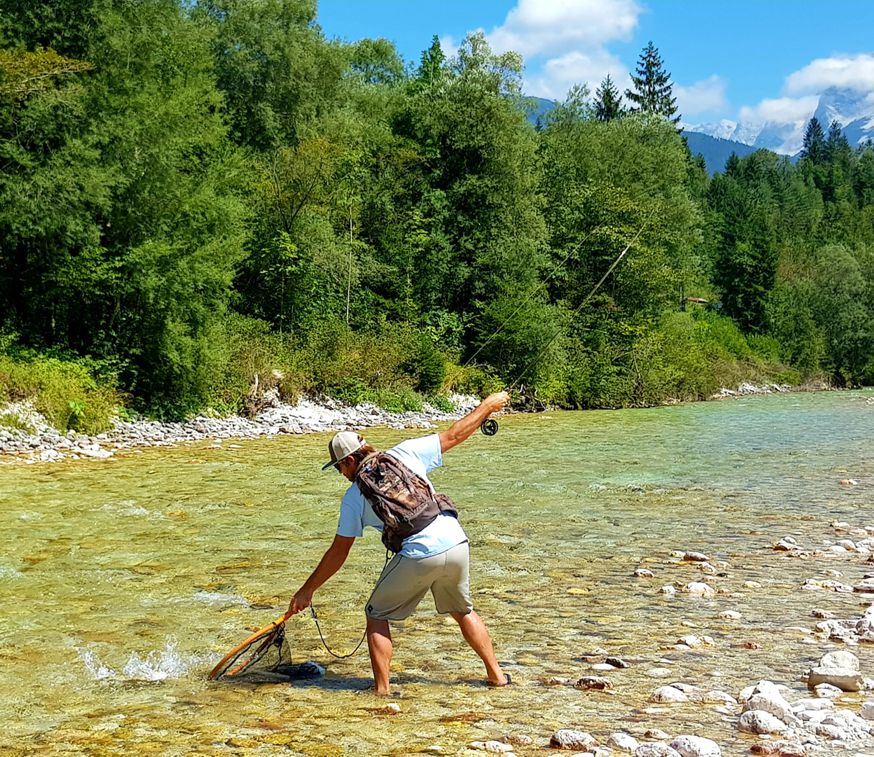 It happens more often than not that if you get a great first cast in, the fish will take you by surprise on the way that they smash a fly with so much enthusiasm. It’s best at this time to be in the zone and prepare yourself for a successful landing of the fish as Marbles can often fight dirty with big head shakes and rolling if hooked close by or by using the river to their advantage. Once in the current they like to head for cover or downstream, in which case it’s best to chase that fish as hard as possible because once they get going, they can be hard to stop. Often the fish may take a look at your fly and reject it with much disgust, don’t despair just change the fly for another. Maybe the size, colour or pattern will be of use here but the actual trick here is to choose wisely and do as few a cast as possible as to not increase the chance disturbing the water and spooking the fish.

Nothing beats the sight of a rising ghost onto your fly as the world tunnel visions around and seems to disappear to nothing more than a vague memory. It only seems to last short period but in fact it lasts a life time. 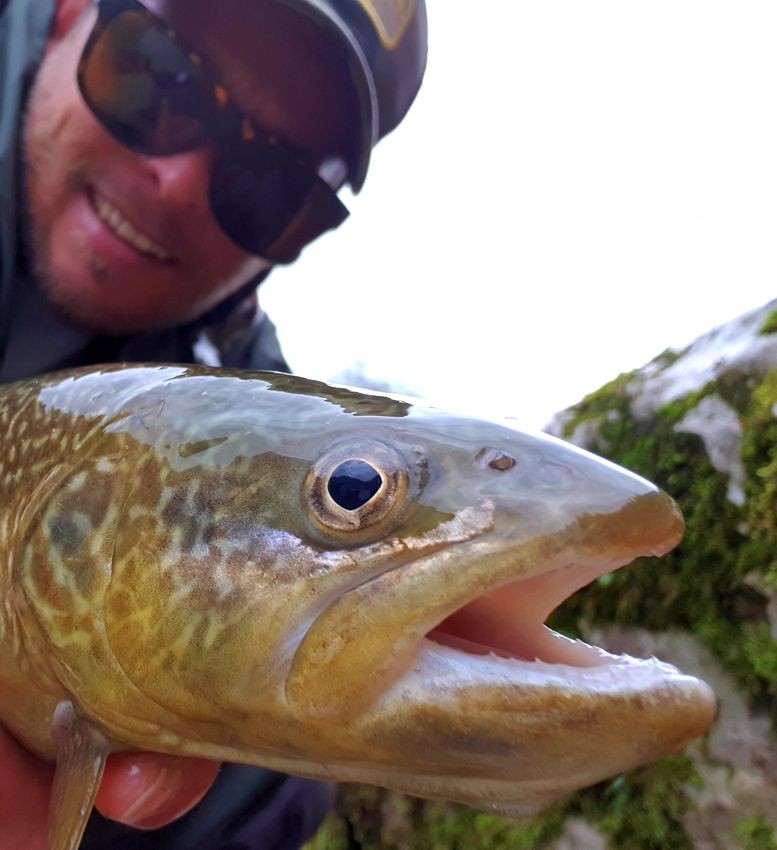 Over the next few blogs I will go over some more of the gear that I have used chasing Ghosts and other salmonids on the Alpine Rivers of Slovenia. I can assure you that my Xplorer gear has given me excellent service this last season, fishing was an absolute blast, with gear performing above and beyond any challenge it was presented with, leaving me with only happy days and memories of the past season. This last month I brought back a Xplorer T50 3wt with an Xplorer EVO C002 loaded with RIO Technical Trout WF3F as well as a RIO Shorty Euro Nymphing Line and managed to get some great time on the water so until the next time. Happy days and tight lines 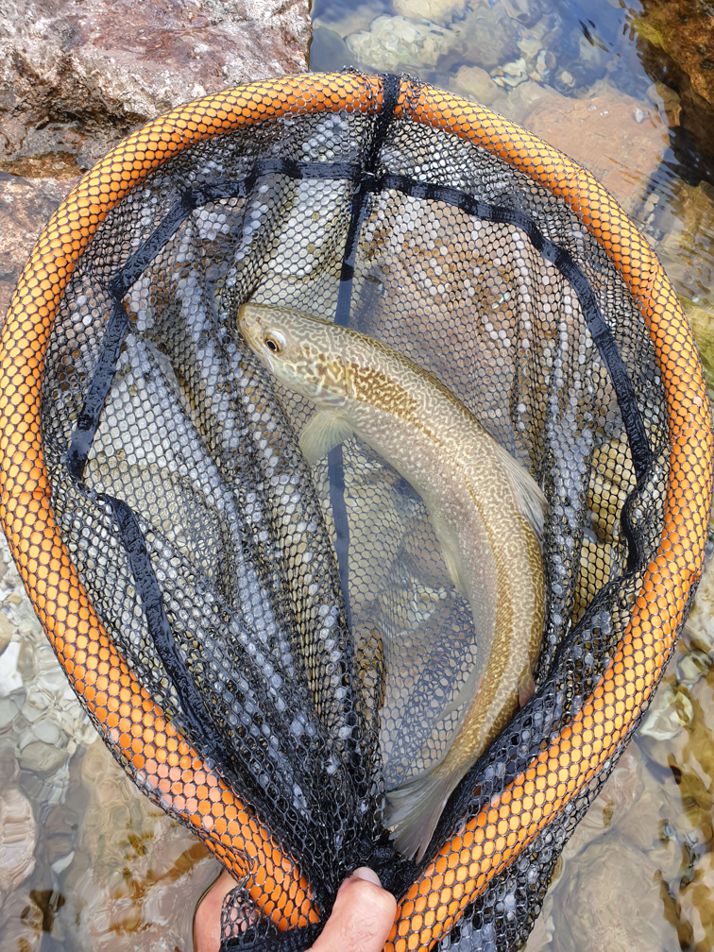 If you want to experience chasing Marble trout in Solvenia, get in contact with Simon and Nina to learn more and see what he has available for the coming season. Simon Bunn is on or Xplorer Pro-staff and is happy to put a trip together for you if you want to target this species.
Contact: Hunter Fly fishing
Simon and Nina Bunn-
www.hunterflyfishing.com
email- Info@hunterflyfishing.com