I remember a mid-February stroll down the banks of my local river last Year as if it were Yesterday. The sun shone bright and warm as the last remaining patches of frost thawed, leaving columns of steam rising from the riverbank vegetation. The daffodils and crocus had made an unusually early appearance and The Horse Chestnut buds had already begun to break into foliage. Over the river were swarms of Large Dark Olives and below them were the dimples and rings left by rising trout. The first of March eventually came around and with much anticipation; I packed my gear and headed out for a session on my local small stream. It was a colder day, bitterly cold, the river was lower than expected and clear. I spent the day fishing the French leader with a team of two nymphs (The Xplorer Guide 2 Xtenda 3wt is ideal for this in its 10ft configuration, but at the same time allowing one the luxury of shortening the rod, either to cast a dry, or enabling you to fish your nymph rig through heavily canopied sections of the river). I managed many beautiful little brownies of up to 11 inches in length and left the river elated, happy to be on my beloved trout streams again.
2018 on the other hand has been a little different. No chance of fishing the opening day of the season when you are snowed in, 3 foot deep! They called it “The Beast from the East”, a Siberian storm that hit the whole of the UK hard, leading to massive snowfall, winds of up to 50 mph and temperatures down to -11 degrees. As the snow finally thawed, the snowmelt turned my local rivers to raging torrents. Things have settled down a bit on the weather front now by late-March and we can turn our attentions to the trout, once again.
It was with much eagerness that I finally got out to wet a line on my local small stream, which had been partially frozen over for a number of days, 3 weeks into the trout season. I was expecting the river to be high, discoloured and cold. To my amazement, the level had dropped considerably in the space of 48 hours and although water temperatures were still Baltic, she was running as clear as gin.
Not expecting much in the way of a hatch due to the freezing conditions, I strung up my Guide2, 10ft 3wt and a hybrid French leader. On the business end of a 3,5ft tippet I attached two weighted nymphs. The first was a point fly PTN jig with a 3mm tungsten bead and the second, a hare’s ear and partridge spider, on a very short dropper about a foot above. I was surprised to see that the majority of the 15 wild brownies that came to the nymphs were taken from very shallow pocket water. I would have expected them to be holding up in the deeper areas given the conditions over the previous couple of weeks, but they came steadily to the net, giving a good account of themselves, all in respectable condition and feeding hard to regain the weight loss sustained over a long, tough winter.
Conditions have improved over the last week or so, and although still colder than it should be approaching Easter time, we have had four consecutive days of weak but warming sunshine. The water temperatures have risen a degree or two and the last few days have brought on sporadic hatches of Large Dark Olives (Baetis rhodani). These are the staple of the dry fly fisher’s armoury for the first month of the Season and it is comforting to see them flitting over the water’s surface again albeit a few weeks late.
After a conversation with my Father-in-law about the late arrival of spring this Year, he stated that this spring had reminded him of the icy winters that Northern Ireland would have been accustomed to 20 Years ago. He said that over the last decade the winters have gradually become milder and wetter, with less snowfall, more precipitation, and the summers cooler and wetter too. According to him, we can be assured of a warmer summer to follow. I certainly hope he is right! 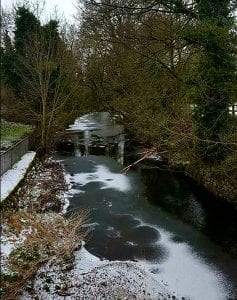 My Local wee River frozen over 10 days into March 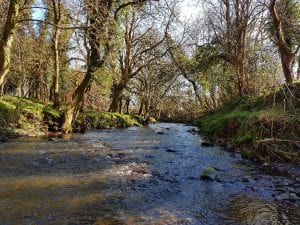 The same river a week later. 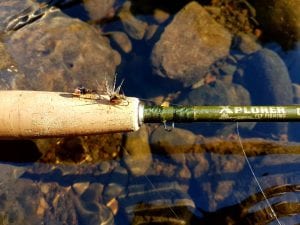 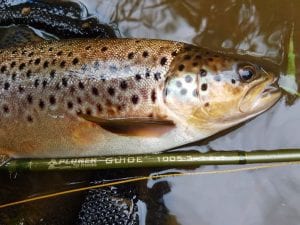 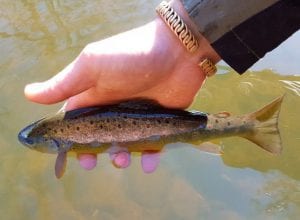 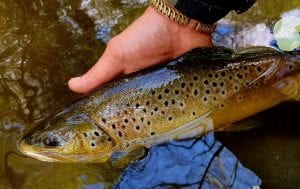 Still a few Heavies around. 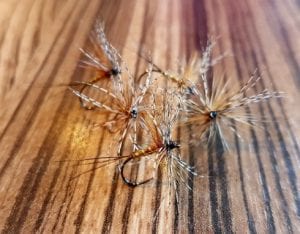 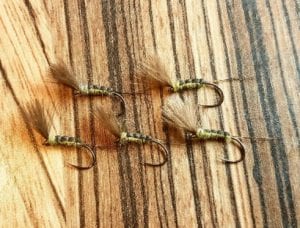