Joining the masses at a fly fishing festival can be quite a shock to the system. I joined a team this year to fish the Boston festival that was held in the Natal Midlands in the midst of winter. I arrived at the Boston Country Club a little early, to put up some Xplorer Branding. This would turn out not to be the cleverest move. All the hard-core, die-hards were sitting around the pub talking fishing tactics, this led to an early start to a few drinks. The rest of the team was not too far behind, joining in the festivities and getting caught up until the early hours of the morning. 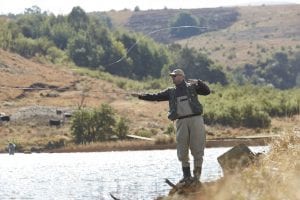 Derek, Al, Lyndall, Sjorn and I made our way to our first dam at Tillietudlem Fly fishing Eco lodge. Not feeling too clever after the late night we made our way through the mist at first light to arrive at the waters’ edge. The mist was just starting to burn off, leaving a blanket of frost all around. The water looked amazing, just a slight rippled as the wind blew onto the dam wall. I rigged my Xplorer T-50 5wt rod with the new RIO In-Touch Camolux intermediate sink line and a red eyed roach. A few casts off the wall and my line went tight, this got the rest of the team up and going. First fish of the day and a lovely rainbow cock fish of 64cm. 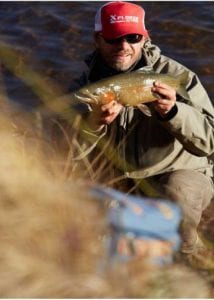 It wasn’t long and I was surrounded by the rest of my teammates and the sound of laughter as they started to join in the fun, smashing fish after fish. Most of the fish were good quality fish and in prime conditions. 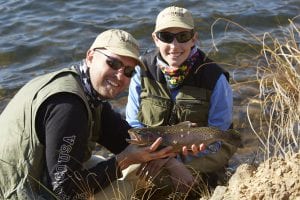 Packing up after a good mornings fishing we moved onto our next dam on the same farm just a five minute drive away. We arrived at the main guest lodge to be greeted by a nice cup of hot coffee and some rusks enjoyed around the old fire place. By this stage I think we were all a bit reluctant to leave the warmth of the fireplace and face the elements again.

The fishing became very challenging as the day went on, we only managed a few small fish, nothing to write home about. 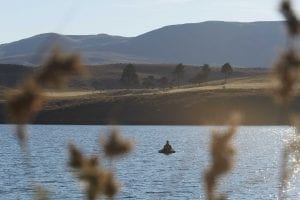 It was time to head back to the Country Club and the warm welcome from the Boston Farming Community. Another night of socializing and then off to bed, as we had a drawn what hoped to be a great piece of water for our morning session. I had been looking forward to fishing this dam for years.

Growing up in my early teens my dad had taken me fishing to dam called Rivendell , the same dam we were to fish the next day, so this was a bit of a nostalgic trip for me. We arrived at Rivendell, the team eager to get fishing after the stories I shared with them about this little piece of heaven. 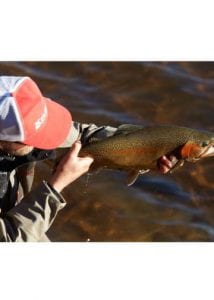 We tackled up our rods and started walking the banks looking for some signs of activity. It wasn’t long before we started to see a few fish midgeing along the shallow banks. I was fishing the RIO In-Touch Gold floating fly line with a 12ft tapered leader with two small pheasant tail nymphs. This proved to be the ideal set up for this situation. We made our way along the shallow flats, casting at the fish sipping just below the waters’ surface. What a successful mornings fishing we had. I will remember this day for a long time to come. We each caught and released at least three healthy fish each, and the biggest was a Rainbow hen of 62cm. What a morning. We fished until mid afternoon on Rivendell with similar success before heading back to the Country Club for prize giving and socializing with the other anglers. 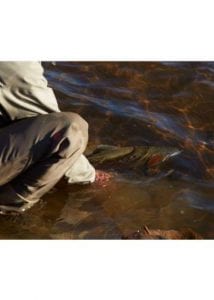 A big thanks to The Boston Community for another great Boston Fly Fishing Festival, to all the new friends we met in the pub as well as on the waters, than you.

The Boston Festival is certainly one to enter, if you haven’t fished it yet. The Fishing is awesome on selected private water in the Boston area that doesn’t get much pressure through-out the year. The Community comes together puts on a special event.

Remember to Release the quality fish to have better and bigger fish in years to come.